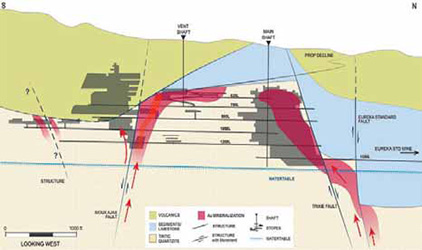 The Trixie long section shows historic mining to the water table.
Osisko Development Corp. completed the previously announced acquisition of Tintic Consolidated Metals LLC, which owns the producing Trixie test mine, as well as mineral claims covering more than 17,000 acres (including more than 14,200 acres of which are patented) in central Utahs historic Tintic Mining District.

With the acquisition of Tintic, we have inherited not only a highly prospective test mine in the Trixie project, but also a large, historic land package in one of the worlds premier mining jurisdictions, Chair and CEO Sean Roosen said. Through underground exploration, we hope to continue to expand the mineralization footprint along the T2 and T4 zones. The company has also engaged drilling contractors.

Osisko Developments near-term plan is to initiate underground and at surface drilling while it continues exploration development and processing of the mineralized material at the Trixie project. Drilling is targeting support for preparation of an initial resource statement over the next 12 months. Concurrently, the company will complete advanced technical studies on the project to generate additional surface and underground targets, conduct metallurgical testing, geotechnical work and environmental studies to justify further development as well as increase production through a low-capital expenditure expansion.

The Tintic District is Utahs secondmost prolific mining district. It has been mined since the 1860s. Most recently by Kennecott from 1965-1995. Tintic Consolidated Metals reopened the Trixie mine in 2020. Historically ore shoots were mined to the water table, with mineralization remaining open at depth.