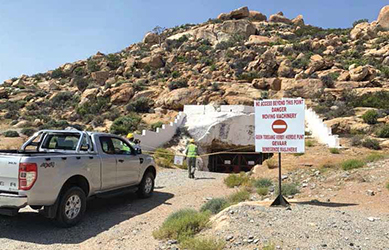 The OCC project includes several un-mined, drilled copper deposits  many with mine access
declines and shafts in place, like the Flat mine.
At the beginning of February, Orion Minerals Ltd. entered into an agreement giving it exclusive rights and a clear pathway to acquire and consolidate a significant interest in the Okiep Copper Complex (OCC), located in South Africas Northern Cape Province. The OCC holds the mineral rights for several large historical mines, which produced more than 2 million metric tons (mt) of copper. This represents a significant growth opportunity for Orion, which could become a future second base metal production hub, alongside its flagship Prieska copper-zinc project, located 450 kilometers (km) east of OCC.

Under the agreement, Orion has an exclusive option to undertake due diligence and acquire a 56.25% interest in Southern African Tantalum Mining (Pty) Ltd. (SAFTA)  alongside Industrial Development Corp. of South Africa Ltd. (IDC) with 43.75%, 100% of Nababeep Copper Co. Pty Ltd. (NCC) and 100% of Bulletrap Copper Co. Pty Ltd. (BCC). These assets are collectively known as the OCC. The OCC project includes several unmined, drilled copper deposits  many with mine access declines and shafts in place. The current owners have completed resource estimates and a scoping-level feasibility study that Orion will subject to due-diligence scrutiny in coming weeks. Based on in its initial investigations, Orion believes there is an opportunity to restore mining at OCC to historical production levels when it was operated by Newmont in the 1980s.

This is a unique opportunity to acquire a dominant position in a historic world-class copper mining district  an exceptional growth and diversification opportunity, said Orions managing director and CEO, Errol Smart. We believe that the complementary combination of the advanced OCC with our [Prieska] will transform Orion into a significant base metals mining house, accelerating our journey to become a major producer in the Northern cape region.

Orion intends to apply its proven expertise in permitting and developing large-scale base metal projects to the OCC opportunity, with work to commence immediately on resource modelling to upgrade estimates using good quality drill data. The company said it plans to review the 2019 scoping-level feasibility study will also be reviewed before reporting and, if appropriate, advancing to a bankable feasibility study.

The total acquisition cost assuming the option is exercised, payable in stages at various milestones through a combination of cash and Orion shares, amounts to an aggregate total of ~A$7.5 million of initial purchase consideration, with possible deferred consideration of an additional ~A$8.5 million. The deferred consideration is payable on successful definition of JORC compliant Mineral Resources above cut-off grades ranging from 1%-1.2% copper in addition to a baseline of 8.9 million mt.

Given the shallow nature of many of the deposits  many of which have been drilled extensively  we see an outstanding opportunity to fast-track resource delineation and feasibility studies to underpin near-term production, Smart said. Our immediate focus will be to upgrade the existing SAFTA resources and feasibility study to JORC status, which we anticipate will be a relatively quick and cost-effective process.

Should this work be successful, Smart believes production from OCC would supplement Prieskas forecast production of 22,000 mt/y of copper and 70,000 mt/y of zinc. This would transform Orion into a substantial base metal mining house with two operating hubs in Tier-1 mining districts in the Northern Cape.

Roughly two weeks after making the OCC announcement, Orion secured an option to purchase mining and exploration records and extensive data of the OOkiep Copper Co. giving it access to data covering more than 60 years of mining history for ZAR25 million ($1.77 million), payable in cash and Orion shares. This transaction includes all historical mining and exploration records over areas included in the OCC Option. Data includes exploration records and historical due diligence reviews over much of the Northern Cape Province, including Orions own Prieska copper-zinc mine and the Areachap Belt, undertaken by Newmont and Goldfields through the OOkiep Copper Co.

Consolidating important datasets and records with current prospecting rights and mining rights that are subject to the OCC option agreement unlocks enormous value and positions Orion to fast-track exploration and feasibility studies on a number of high-priority targets. A large proportion of the hard copy records have been converted into high-resolution digital format and have been used to capture a large digital database of drilling data. This will allow resource modelling and target generation to proceed rapidly.

Access to the datasets will allow Orion to fast-track its evaluation of this copper district. The acquisition of this incredible dataset comprising more than 150,000 hard copy records and including drilling and sampling of more than 26,000 drill holes is a remarkable coup for the company, Smart said. With a replacement value of hundreds of millions of Rand and encompassing more than 60 years of intensive work by top explorationists and geologists of the time, this acquisition is a tremendous step forward for Orion.