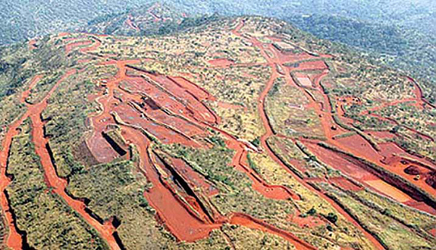 Under special terms and conditions, the SMB-Winning consortium will export its ore through the Guinean territory and construct a railway line of more than 650 kilometers and a deep-water port at Matakong, according to SMB-Winning. SMB is a consortium formed by the Singaporean shipowner Winning Shipping, the Chinese aluminum producer Shandong Weiqiao, the Yantai Port group as well as the Guinean transport and logistics company United Mining Supply (UMS). It has become the leading exporter of bauxite from Guinea, with 42 million mt produced in 2018. The SMB employs 9,000 people in the Boké region.

Blocks 1 and 2 became available after billionaire Beny Steinmetzs BSG Resources (BSGR) said it would walk away from the Simandou project, but retain the right to mine the smaller Zogota deposit. The Simandou Project is an iron ore exploration and mining project located toward the southern end of the 110-kilometer- long Simandou mountain range, 550 kilometers southeast of Guineas capital city Conakry. It is one of the largest undeveloped high-grade iron ore deposits in the world, it is to be a conventional openpit mine with an expected capacity of 100 million metric tons of iron ore per year.

Simfer S.A. is the holder of the Simandou mining blocks 3 and 4. Simfer is a joint-venture ultimately owned by the government of Guinea, 15%, Rio Tinto, 45.05%, and a consortium of Chinese State-owned enterprises lead by Chinalco, 39.5%.