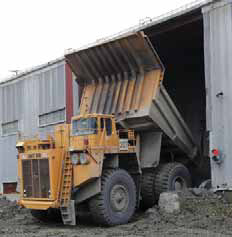 A haul truck dumps ore at the Aikhal No. 14 processing
plant, which processes about 10 million mt/y.
Russian diamond mining company Alrosa has begun open-pit mining on the Zarya pipe and initiated work to deepen the underground Aikhal mine at its Aikhal Mining and Processing Division in central Russia. Development of Zarya deposit has been one of Alrosas major investment projects, with a total investment of 12 billion rubles (about $180 million at current exchange rates). Production from the deposit will replace depleting stock from the Komsomolsky open pit and looking forward will ensure stable mine production for the division.

Alrosa plans to mine the first 100,000 metric tons (mt) of kimberlite ore from the Zarya pipe in 2019. Expected mine life is 11 years, with an ultimate mine depth about 300 meters (m). Development for mining of the Zarya pipe began in 2016 and took almost three years to complete, including removal of 14 million m3 of overburden; building a roadway, hydraulic engineering structures, and infrastructure facilities; and purchase of technical equipment. At the Aikhal underground mine, Alrosa has elected to develop the mine from its current maximum depth of 100 m to 400 m below surface and extend mine life until 2044. Capital costs to develop the project are estimated at about 10 billion rubles ($150 million). Project development will add almost 20 million carats to the Aikhal divisions resource base.

The main haulage level will be developed at 100 m below surface, with construction of mine openings for underlying beds beginning in 2020. Extraction at horizons below the 100-m level is planned to begin no later than 2027. Alrosa is the worlds largest diamond mining company in terms of carats produced. Company-wide production in 2018 totaled 36.7 million carats and is forecast to increase to 38 million carats in 2019. The Aikhal division accounts for about 30% of the companys production.