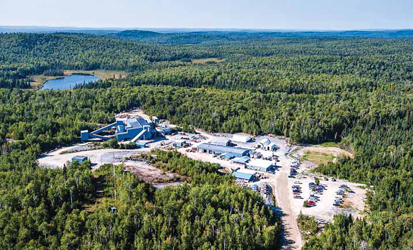 Located in Ontario, the Island Gold mine is one of Canadas highest grade and lowest cost gold
mines.
Alamos Gold Inc. has been granted amendments to its existing operational permits from the Ministry of the Environment, Conservation and Parks, Ontario, allowing for the Phase II expansion of the Island Gold Mine to 1,200 metric tons per day (mt/d). These amendments were received ahead of schedule and will allow underground mining and mill throughput rates to increase from the previously permitted rate of 1,100 mt/d.

Island Golds underground operations are accessed via a ramp system. The primary mining method is longitudinal retreat long-hole stoping. Ore is hauled by truck to the Kremzar mill located approximately 0.8 kilometers (km) from the portal of the ramp. The mine is expected to produce between 135,000 ounces (oz) and 145,000 oz of gold in 2019 at an all-in sustaining cost of $730-770/oz.

Underground mining rates are expected to increase to 1,200 mt/d in 2020. The company said it will look for opportunities to ramp up mining rates to 1,200 mt/d before the end of 2019; however, 2019 guidance for production and costs is unchanged. With a mine and mill that can both support throughput rates of 1,200 mt/d, no additional capital will be required for the Phase II expansion.

At the same time, the company is continuing with a large ongoing exploration program at Island Gold, which has been successful in driving significant growth in mineral reserves and resources the last several years. This growth and ongoing exploration success, according to Alamos, is being incorporated into a Phase III expansion study beyond 1,200 mt/d. The study is expected to be completed over the next year.