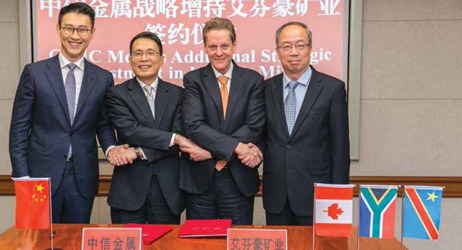 The funds will also allow Ivanhoe to significantly advance or achieve production at the Platreef Project in South Africa, the company said. Zijin Mining is Ivanhoes joint-venture partner at the Kamoa-Kakula copper project in the Democratic Republic of Congo. Zijins exercise of its anti-dilution rights will maintain its ownership in Ivanhoe Mines at 9.8%. The Kamoa-Kakula project has been ranked as the worlds largest, undeveloped, high-grade copper discovery by consultant Wood Mackenzie.

The Kipushi prohect is 68% owned by Ivanhoe and 32% held by the DRCs stateowned mining company, Gécamines. The project is based on the high-grade, underground zinc-copper mine in the Central African Copperbelt, which mined approximately 60 million metric tons grading 11% zinc and 7% copper between 1924 and 1993.