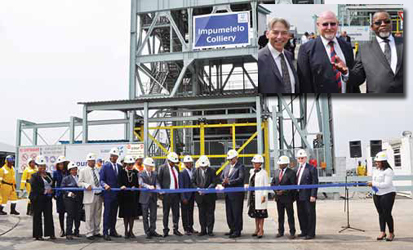 Sasol celebrates the opening of the Impumelelo Colliery in South Africa. Inset: Sasol CEO Steven
Colin, Senior Vice President of Mining Operations Pierre Jordaan and Minister Gwede Mantashe.
Sasol officially opened a new colliery in Mpumalanga, South Africa, where it beneficiates coal into high-value fuel and chemical products at world scale. Meaning success in Nguni, Impumelelo is one of three world-class mines Sasol has constructed in the last decade as part of its R14 billion ($994 million) mine replacement program and includes Thubelisha and Shondoni.

The inauguration was attended by Minerals Resources Minister Gwede Mantashe. With an investment of R5.6 billion ($398 million), Impumelelo will have the capacity to produce 10.5 million metric tons per year (mtpy). The colliery currently employs 1,760 people, most of them from nearby communities in Mpumalanga. In addition to sustaining some 4,000 jobs, the new mines are critical to securing coal supply to Sasol Secunda Synfuels Operations up to at least 2050, said Sasol Joint President and CEO Bongani Nqwababa.

A unique feature of the mines is the investment in technologically advanced measures that Sasol has made to ensure the safety of its employees as well as the environment. These include proximity-detection systems on our trackless machines, which warn and eventually stop the production machines from operating when a person or an object is too close, said Nqwababa.

Another technology measure the mines have is an electronic-trigger LED flickering light system to enhance the underground safety precautions. This system visually draws miners attention when there is movement in the roof. Other investments are in a variety of noise reduction technologies. Sasol is the third-largest producer of coal in South Africa with an output of some 40 million mtpy.