B2Gold Expanding Fekola Mine in Mali 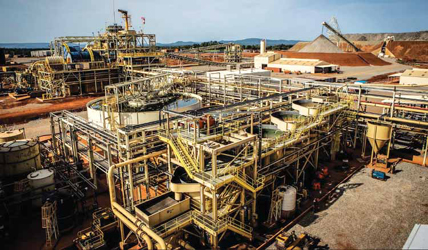 The expansion plans at the Fekola gold mine inlude adding more mining equipment to account for the
1.5-million-metric-ton-per-year increase in throughput. (Photo: B2Gold)
B2Gold has started a project to increase processing throughput at its Fekola gold mine in southwest Mali from the current base rate of 6 million metric tons per year (mt/y) to 7.5 million mt/y. The expansion is based on an Expansion Study Preliminary Economic Assessment (PEA) conducted to evaluate the life-of-mine options for expanded mining and processing to maximize the value of substantially increased indicated and inferred mineral resources at the mine.

Based on a new optimized mine plan, the mining rate at Fekola will also be increased, and the mining equipment fleet will be expanded to accelerate the supply of higher-grade ore to the expanded plant. As a result of the project, the Fekola mine will produce more gold over a longer life, with more robust economics and higher average annual gold production, revenues, and cash flows than it would have produced under the previous life-of-mine plan.

Revised projected life-of-mine operating cash costs and all-in sustaining costs remain low, below $500 and $700/oz, respectively, despite mining a larger open pit at a slightly lower gold grade. This results from economies of scale arising from increased mining and processing rates and the new optimized mining schedule. Processing plant expansion and upgrade capital costs are estimated at approximately $50 million over a period of approximately 18 months. The forecast expansion capital payback period is less than one year.

The projected annual mining rate will increase to a baseline of approximately 54 million mt/y and subsequently will be stepped up to approximately 76 million mt/y to support the increased processing and stockpiling necessary to maintain plant feed grade. Current production averages about 36 million mt/y.

Total life-of-mine processed tonnage is estimated at about 84 million mt at a grade of 1.9 g/mt gold. The project schedule indicates that the processing expansion will be fully operational by the fourth quarter of 2020. B2Gold is investigating the potential to accelerate this schedule based on the availability of long-lead items.