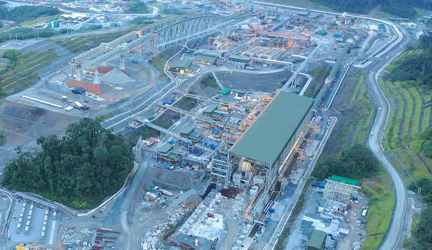 An aerial photo shows the Cobre Panama processing facilities, which are ramping up to 100 million metric
tons per year beginning in 2023. (Photo: First Quantum Minerals)
First Quantum Minerals has filed an updated technical report for its Cobre Panama project in Panama that incorporates updates with respect to ramp-up and commissioning of the current operation and provides detail on a planned expansion of project throughput from 85 million metric tons per year (mt/y) to 100 million mt/y starting in 2023. The report also includes an updated production schedule and mineral resource and reserve tables that reflect the inclusion of grade-control drill-hole data.

Inclusion of the new data has improved geological confidence for the projects Botija pit, but represents no overall material change to the mineral resources and reserves previously disclosed. The expanded throughput to 100 million mt/y involves earlier development of the adjacent Colina pit, the addition of a ninth mill, an expanded mining equipment fleet, additional conveyors, an in-pit crusher, and other infrastructure related to Colina access. The total cost of the expansion to 100 million mt/y is estimated at approximately $327 million. Average production levels of copper in concentrate are expected to exceed 375,000 mt/y after year five. The expansion also significantly improves the overall project economics.

The Cobre Panama project is located 120 kilometers (km) west of Panama City, Panama, and 20 km from the Caribbean coast. The topography in the concession area is low elevation (less than 300 m) but rugged, with considerable local relief covered by dense rainforest. Climatic conditions are tropical, with high precipitation levels, high humidity, and relatively high temperatures of 25° to 30° C year-round. Mining is based on large-scale, conventional open-pit mining methods. Multiple pits will be mined in an optimized sequence, with ore crushed in-pit and conveyed overland to a nearby processing plant.

Processing plant design is based on a conventional sulphide ore flotation circuit, with differential flotation producing separate copper and molybdenum concentrate products. Plant tailings will be directed to an area immediately north of the mine and plant site and also into the depleted Botija pit at the cessation of mining. The copper concentrate product will be piped as a slurry at a distance of 25 km to a port at Punta Rincon on the Caribbean coast, where it will be loaded on to vessels for shipping to world markets. The molybdenum concentrate will be delivered to port by road and shipped in containers.

Project power will be generated by a coal-fired power station at the port and transmitted to the mine site along the same access corridor that accommodates the concentrate pipeline. Surplus power can be supplied to the national grid, as available.