The Complexity vs. Performance Dilemma
Modern thickener and filtration solutions can be customized to meet brownfield site or plant expansion project needs, but within limits 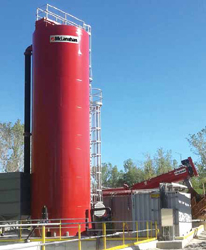 McLanahan reports its deep cone thickener, an
ultra-high-rate thickener, offers sludge monitoring
via PLC, increased control over the dewatering
process, and a reduced footprint.
(Photo: McLanahan Corp.)
Determining the best thickener or filtration system for a new or existing plant will invoke a decision tree that reads like a list of calculated tradeoffs. We are always compromising on the choices, engineer and thickener expert Tom Keirn said in a recent presentation. Fortunately, several of the solutions on the market today seek to minimize the cons while maximizing the pros. A summary of the highlights of several illustrates this point.

Maximizing Space and Water Usage
McLanahan Corp. hosted a webinar in late September that explained the needs for, the benefits of, and the basic operations of six different types of thickeners. The type of thickener that will best serve a miner depends on site specifics, goals, and the desired level of commitment to monitoring and maintenance, according to Tom Keirn, territory manager, wet processing, North America, McLanahan.

Generally speaking, a thickener would be optimum in the event the miner faces restrictions related to pond permitting, water supply limitations, certain complications with existing ponds and plant infrastructure, or unwanted pond maintenance requirements. The primary benefit of deployment of a thickener is increased availability of clean water for use in the plant. Approximately 85% of the water is recovered, Keirn reported. What water is lost is lost through the thickened solids. Via a thickener, the miner can reduce the use of settling ponds to the point of, in some circumstances, eliminating them, Keirn reported.

Thickeners work by applying chemicals to a slurry being piped into a pool or silo. Those chemicals, called flocculants, cause certain particles within the slurry to clump together, or form flocs, and sink. Larger flocs settle more quickly to allow for recovery of water and consolidation or thickening of solids, Keirn said. The clean water at the top overflows containment at a set location and is captured while the mud at the bottom is collected and channeled into an underflow pump for further processing.

Thickener performance and process outcome depend on many variables, foremost of which is often the flocculant selected, Keirn reported. McLanahan offers a service that assists the miner with the selection process.

The company will research to compare the different options, run a model to home in on costs and possible outcomes, and then customize the features to the possible methodologies. And we will reiterate those with the customers input and make sure we have the right features and the right thickener design for the customer, Keirn said. Finally, well do a finite engineering analysis final model.

Keirn recommended working backward to arrive at the best possible solution. Consider first the desired outcome in the placement area, he said. You want to define the method of placement and consider mechanical methods, what kinds of pumps you are going to be using, and whether it is going to be gravity flow to that final method or final placement area, Keirn said. And then you want to consider settling options. Finally, you want to define the equipment and the location of that equipment in your plant.

Different thickeners will have different settling rates, which is largely determined by the type and amount of flocculants applied. The flocculants must overcome the rise rate of the exiting clean water, Keirn said. Higher floc dosage generally results in faster settling rates; however, it can result in decreased underflow density, Keirn said. Underflow density refers to the packing of the solids as mud at the bottom. The density of the mud is a factor in determining how it can be further processed and handled downstream.

How much polymer is absorbed is determined by the amount of solids entering the thickener. The more tonnage per hour of solids being piped in, the more polymers absorbed. Too little polymers per ton per hour of solids results in low mud density and poor overflow clarity. Too much flocculant is wasteful and inefficient.

An imbalance that results in leftover polymers can cause problems and represents wasted money. The dosage is typically 30 to 50 grams of polymer per ton of solids, Keirn said. In general, cost is $0.25 per ton. The main components of many thickener systems are the bridge or trusses, the drives, which can be electric or hydraulic, and the rake system, which, powered by a drive, moves the mud towards the underflow exit.

The size and shape of the thickener and its usage of those components determines its unique capabilities, which should be matched to the site needs. For example, typically underflow density depends on the particle size of the thickener feed, Keirn said. Therefore, a plant with a feed comprised of larger particles might do well to consider a type of thickener with the capability to handle denser mud.

High-rate thickeners can be elevated and employ radial rakes. It offers a relatively dense overflow, Keirn said. The on-ground tanks have long suction pipes that can plug and limit underflow concentration. Ultra-high-rate thickeners are typically rake-less with few moving parts or wear items. It has a higher flocculent consumption than high-rate or paste thickeners, Keirn said. It offers a decreased underflow density do to the lack of rake and the high polymer dosing.

Paste thickeners present a complexity vs. performance tradeoff, Keirn said. That translates to an increase in costs, but you get a higher density underflow and a higher viscosity in the underflow. The controls on thickeners made by McLanahan manage bed level, bed pressure, torque and rake height. Optional is the PLC, clarity meters, beacon, and rake position controls and different options for monitoring underflow and mud level within the thickener, Keirn said. The final branch on the decision tree is the level of commitment to monitoring and maintenance. Some require more work than others, but for each you do need to monitor your thickener performance, Keirn said. Some good indicators of thickener performance would be the sludge level within the thickener, the floc size, the size of the floc within your thickener, torque reading on your rake and then monitoring the underflow density and making sure you are hitting your target underflow density that was designed.

Lower Cake Moisture in a Smaller Footprint
Peterson Filters Corp. reported the feedback from a Wollastonite miner in Mexico that deployed two prototype Pocket vacuum disc filters continues to be very positive, even after more than a decade of almost continuous use. 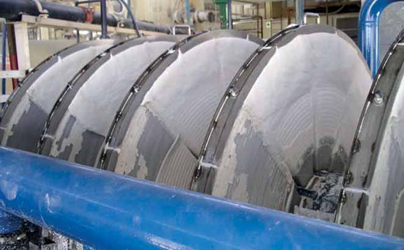 The machines, designed in 2006 specifically for the project and built in 2007, have operated continuously during batch production for almost 12 years. Those original machines are still operating today, Rick McKay, sales manager, Peterson Filters Corp., said. A new scraper design was formulated for this operation and has been widely accepted. The original Pocket filters replaced two centrifuge machines and provided 5% lower cake moisture, Peterson Filters reported.

Each machine is a tight row of vertical two-sided disc-shaped filters connected by pipes and housed within a shallow rectangular steel trough for a compact footprint, thus the moniker. There are six 4-ft 6-in. filters, each with a 25-ft2 surface area, per machine, providing a total filter area of 150 ft2 per machine.

Slurry is piped in and the filters quietly but quickly discharge a circular cake, which is captured by the trough. When the filters are covered with snow white silicate cakes, from the right angle the machine looks something like a loaf of white bread still in the pan with the slices spaced out equidistantly. Each machine can process 10 metric tons per hour (mt/h) of silicate mineral for a total production of 20 mt/h.

The miner adopted the prototypes and then successor models due to their reliability, ease of maintenance, and cost savings potential, McKay said. Those benefits are the result of a number of innovations, Peterson Filters reported. For example, the stainless steel-fitted plastic filter sectors offer improved durability and reflect the companys commitment to continuous improvement, McKay said.

The sectors are mounted directly on the center shaft, simplifying the design and eliminating the need for the companys Turn Flow bell seat, which on other models clears the cake without hindering airflow within the system. Instead, cake discharge is facilitated via a precision deflector, which, along with Syncro Blow air pulse, assists with complete discharge of very thin filter cakes, the company reported, describing the innovation as a major improvement.

The benefits of the precision deflector include a more reliable discharge and ease of adjustment. The cake deflector is designed such that the deflectors can be adjusted precisely, and the blade can be set at the same time as other pieces are adjusted, McKay said. The new scraper utilizes a two-beam frame design that allows for independent adjustment. This independent adjustment is the most noticeable benefit, as it is much easier for maintenance as well as initial filter commissioning.

Helping ensure a more reliable discharge, the Syncro Blow unit provides a synchronized pulsed blow of air that is timed to aid in the complete discharge of the cake from the filter sector, McKay said. Adding durability, the machines employ a smaller version of the popular Peterson structural steel design centershaft, and employ all-mild-steel automatic filter valves, the company reported. Thus, the centershaft contributes to the overall low cost of the solution, McKay said. Previous designs utilized a series of cast iron barrels that were more expensive and difficult to work with, he said. A onepiece centershaft design is both lower in cost to make and maintain, and more reliable and easier to work with in operation and during interval maintenance.

The Pocket filters are ideal for portable or temporary operations, such as small pond reclamation projects in the coal and other industries, as well as for pilot plants, Peterson Filters reported. The machines can be customized to suit any application in any industry where a smaller filter is required, McKay said.

Similarly, the machines can be scaled up, but within limits, he said. All Peterson filter designs are dependent on design parameters, customer specifications, plant characteristics, and other factors, McKay said. Currently, our largest filter is 3.8 m. However, historically, we have not seen a need to increase the Pocket model in size, based on customer requirements. Further, some of the design modifications used in the Pocket filter would not be applicable or possible on larger machines, he said.

Crafting purpose-built filtration solutions like the Pocket filter is one of the companys longtime core missions, he said. Peterson Filters has been designing and providing vacuum filtration units since 1943, McKay said. We pride ourselves on our expertise in filter technology, filter maintenance, and dedication to customer satisfaction. Every filter is designed and manufactured to customer specifications and requirements.