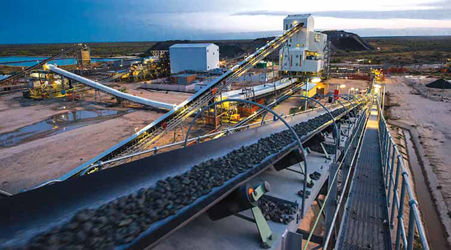 Karowe Underground development would benefit from the brownfields nature of the existing operations at Karowe. Since declaring commercial production in July 2012, the mine has processed 2.5 million metric tons per year (mt/y) of ore from three kimberlite lobes and produced an average of 320,000 carats per year.

The Karowe Underground PEA evaluates the development of a sub-levelcaving operation that would integrate into current operations, with kimberlite sourced from underground being stockpiled in the latter years of open-pit operations to ensure sufficient feed for the plant.

Karowe Underground development targets the South Lobe kimberlite resource below the current planned bottom of the open pit, expected to be at approximately 320 m below surface, with mining extending to 590 m below surface. Pre-production capital costs to develop the underground mine are estimated at $195 million. Due to the benefit of having existing infrastructure and processing facilities, pre-production capital requirements will predominantly go toward the purchase of underground equipment, underground mine development, and dewatering systems.