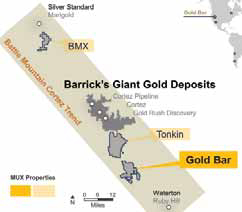 The Gold Bar project is located in Nevadas Battle
Mountain Cortez Trend.
In early November, McEwen Mining Inc. said it received a signed Record of Decision (RoD) on the Final Environmental Impact Statement (EIS) for the Gold Bar project in Eureka County, Nevada, and that construction would begin immediately. Gold Bar would be the first new gold mine in Nevada to gain permit approval in several years.

This is great news for McEwen Mining and the state of Nevada, said Rob McEwen, chairman and chief owner. Our mission to build Gold Bar has been ongoing since 2013, during that time we have overcome many challenges involved in bringing a new mining project to fruition.

We advanced from draft EIS submittal to a RoD in under 8 months, a very brisk pace for the last leg of the permitting process, McEwen said.

The Gold Bar project is located within the Battle Mountain-Eureka-Cortez gold trend of Eureka County, Central Nevada. The property has seen historic mining from 1990 to 1994 by Atlas Precious Metals Inc.

The scope of the Gold Bar feasibility study is a conventional open-pit mine with oxide gold heap-leach recovery circuit, with key estimates including initial capital of $60 million; after-tax internal rate of return of 20% at $1,150/oz gold and of 36% at $1,300/oz gold; an average annual production of 65,000 oz; and an estimated cash cost of $728/oz.

In January 2016, McEwen Mining acquired a property, Gold Bar South, consisting of 109 mining claims located approximately 3 miles (5 km) from the Gold Bar project. Gold Bar South hosts a near surface, oxide gold resource and has an immediate exploration potential based on several historical higher-grade drill intersections open laterally and at depth. Based on a budget of $1.5 million for 2016 in Nevada, an exploration program for 4,900 m of drilling was conducted with the objective to increase the known mineralization of the land packages and to further develop Gold Bar South into a satellite resource that will contribute to the future Gold Bar production.