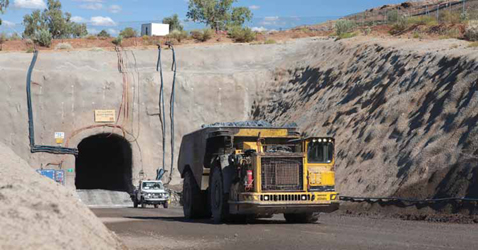 A 65-ton truck hauls ore from the Dugald South Portal.
The first finished zinc concentrate left MMG Ltd.s Dugald River mine on November 8. The milestone was celebrated during the official site opening attended by MMG Chairman Guo Wenqing and CEO Jerry Jiao, and many other dignitaries.

Jiao explained that the opening and first concentrate from Dugald River was an important milestone for the project. Id like to take this opportunity to recognize and thank all those who have played their part in the successful commissioning of the Dugald River project, Jiao said. I congratulate MMG staff and contractors for their hard work in delivering the $550 million project  under budget and ahead of schedule.

Jiao also mentioned the support MMG received from the Queensland State Government, the communities of Cloncurry and the North West, and its major shareholder, China Minmetals Corp., and the China Development Bank, which helped financed the project.

By taking the time to understand the characteristics of this complex deposit, we have delivered the right plan and invested at the right time. We remain positive about the long-term fundamentals for zinc and Dugald River has come into production at a time of tightening global supply and rising prices.

Originally discovered in 1870s, the Dugald River deposit is located approximately 65 kilometers (km) northwest of Cloncurry in Queensland, Australia. The operation will process an average 1.7 million metric tons per year (mt/y) of ore to initially produce 170,000 mt of zinc in concentrate, plus byproducts. When fully operational, the Dugald River mine will be a top 10 global zinc mine.