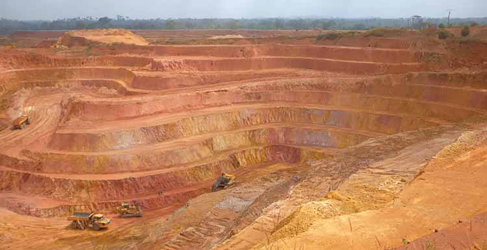 Endeavours Houndé project began construction in April 2016 and is expected to provide 14 years of low-cost
production.
Endeavour Mining has started construction of its Ity carbon-in-leach (CIL) project in Cote dIvoire, where its Ity heap-leach operations have been in production for more than 20 years. Based on current reserves, the CIL project is expected to add 14 years to Ity mine life. Average annual production over the first five years is forecast at 235,000 ounces per year (oz/y) at all-in sustaining costs of $494/oz. Initial capital expenditures are estimated at $413 million.

Endeavours in-house construction team has begun to transition from its Houndé project in Burkina Faso to Ity. CIL project construction will require about 20 months, with the first gold pour currently planned for mid-2019.

Open-pit mine planning for the Ity CIL project assumes an owner-operated mining operation using 90-mt haul trucks and a maximum mining movement of 16 million mt/y, with a vertical advance of approximately 40 m/y. Endeavour sees these figures as conservative in nature due to the annual rainfall at the Ity project. Mining is scheduled to begin three months before the start of the processing plant to pre-strip the pits and stockpile ore.

The mining fleet contract has been awarded to Komatsu to benefit from synergies relating to minimizing spare parts inventory and maintenance costs, as Endeavours Houndé and Karma mines both have similar fleets.

Capital costs include the construction of a 58-km, 91-kv overhead power line to connect to the national grid. A full 26- MW high-speed diesel back-up power station will provide 100% redundancy.

Infrastructure currently in place will be improved, with roads upgraded to an all-weather and free-draining carriageway to provide access for the delivery of equipment, materials, and services to the site. A new camp will be built approximately 1 km northwest of the process plant and will provide accommodation for 200 employees. Planning also calls for construction of a suitable airstrip.

Endeavour President and CEO Sébastien de Montessus commented, With the upcoming first gold pour at Houndé and Ity carbon-in-leach construction expected to be completed within 20 months, we remain on track to achieve our strategic milestones of becoming a +800,000-oz/y gold producer with group all-in sustaining costs below $800/oz and mine lives above 10 years by 2019.