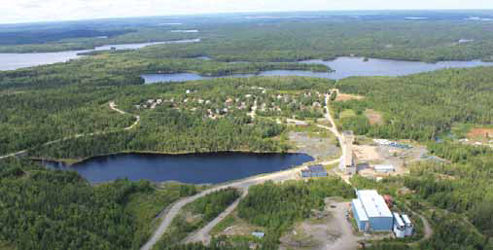 The Madsen Project will likely become Ontarios next gold mine.
Pure Gold Mining has reported the results of a positive preliminary economic assessment (PEA) of its high-grade Madsen gold project in the Red Lake mining district of Ontario. The PEA is based on an updated resource estimate and describes a robust 14-year underground mining operation with highly attractive economics at base-case metal prices.

Mineralized material to be mined over the course of the mine life totals 2.99 million mt at an average diluted head grade of 10.3 grams per metric tons (mt) of gold. At a mill recovery of 92%, recovered gold is estimated at about 911,500 ounces (oz).

The Madsen gold project is being developed on a previously mined property. The existing Madsen portal and ramp will be further developed from its current access to 150 meters (m) below surface down to a total depth of 1,430 m. Access development will utilize widened and rehabilitated existing workings where possible.

Average annual gold production in years three through nine is estimated at about 75,500 oz/y, with peak annual production of approximately 85,000 oz. Life-of-mine operating cash costs plus sustaining costs are estimated at $714/oz of gold recovered. Preproduction capital cost is estimated at C$50.9 million, including a 15% contingency. The payback period is estimated at 2.8 years.

The Madsen gold project PEA is based on underground mining utilizing existing mining, milling and tailings management infrastructure. The existing Madsen portal and ramp are approximately 1 km from the existing mill. Underground mining and haulage are anticipated to be performed by a contract mining company using its own equipment, operating 365 days per year.

Mining will be by a combination of conventional cut-and-fill and shrinkage mining methods, using two-boom electric hydraulic drill jumbos, 3.5-yd3 LHDs, 20- mt haul trucks, scissor-lift bolters, and other rubber-tired support equipment. The PEA assumes upgrading of the existing mill and tailings management facility, which have been on care and maintenance since 1999. Mill throughput of 600 mt/d is assumed to be achievable by modernizing controls and instrumentation of the reagent and grinding circuits and installation of new pumps.

The mill flowsheet consists of a single- stage crushing circuit and a twostage grinding circuit followed by cyanide leaching. The leached gold is collected in a carbon-in-pulp (CIP) circuit, subsequently stripped using mild caustic, and collected on stainless steel mesh cathodes by electrowinning. The product from electrowinning is refined into doré bars in an induction furnace.

Pure Gold benefits from existing permits, including the Environmental Compliance Approval, which allows for operation of a 1,089-mt/d mill and CIP circuit, with discharge of treated tailings to the existing tailings facility. This permit will require updating due to regulatory changes.

Over the coming months, Pure Gold will focus on completing a detailed project development schedule that will provide a critical path to a production decision, including detailed engineering and permitting. Resource definition drilling from the Madsen ramp will test for extensions to the current mineral resource, and exploration drilling from surface will seek to identify and extend new zones of gold mineralization close to existing mine infrastructure.