Never Rest on Your Ores
By Norman B. Keevil, Chairman of the Board, Teck 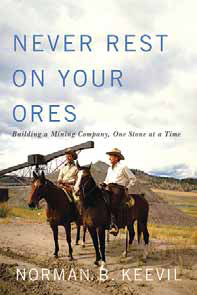 A century ago, a prospector discovered gold at Ontarios Kirkland Lake and a son was born to British immigrants in Saskatchewan. The boy  Norman Bell Keevil  went on to become a renowned scientist, teacher and prospector, discovering a small but high-grade copper mine in Ontario. Parlaying that into control of the Kirkland Lake gold mine 50 years later, he formed the fledgling mining company Teck Corp.

As part of its Footprints Series, Mc- Gill-Queens University Press published Never Rest on Your Ores: Building a Mining Company, One Stone at a Time, a lively and detailed look at how Teck was built from the ground up, authored by Teck Chairman Norman B. Keevil.

Keevils son Norman, also a geoscientist, recounts how over the course of 50 years, a growing team of like-minded engineers and entrepreneurs built Canadas largest diversified mining company. In candid detail he tells the story of a company and its makers of the discovery and creation of mines, of the mechanics of industry financing, and of the role that mergers and acquisitions play in a volatile environment. Along the way he meets fascinating captains of industry and politicians not only in Canada, but in the United States and around the world. Finding an ore body and promoting its development to finance and create a mine, most often in hard-to-access wilderness, is complicated work. Underlying this history is a constant need to replenish the ore, and this need drives the people involved.

Covering 100 years of Canadian mining and business history, the book discusses the discovery and building of mines, the mechanics of financing in a cyclical industry. It provides a unique, behind the scenes look at the business leaders, politicians and colorful characters who have played a key role in shaping Canada and the global mining industry.

Told through the eyes of Keevil himself, the book provides a rare insiders account of the successes, setbacks and fascinating stories that transformed a small miner into a leading Canadian company. A true Canadian success story, it recounts how a father and son with vision, perseverance and a bit of luck helped build Canadas largest diversified resource company.

The book is available at major bookstores and can also be ordered directly from the McGill-Queens website. All proceeds have been dedicated to Mining Matters and MineralsEd., two initiatives designed to introduce grade school children to the wonders of metals and minerals.

Keevil, a professional engineer and geologist, was an officer of Teck during its impressive growth years from 1970 through 2005, the penultimate years of the story. He is an officer of the Order of Canada and a lifetime director of the Mining Association of Canada. Dr. Keevil was inducted into the Canadian Mining Hall of Fame in January 2004 and the Canadian Business Hall of Fame in 2012.