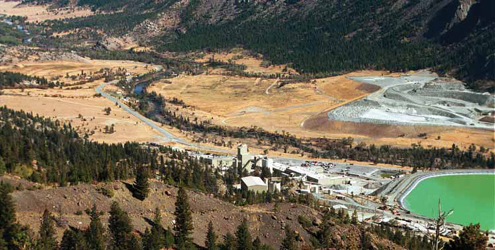 The Stillwater mine, as seen from the top of a mountain, produces about 550,000 oz/y of platinum and palladium.
Sibanye Gold announced on August 30 that it has changed its trading name to Sibanye-Stillwater. The name change reflects Sibanyes acquisition of Stillwater Mining, a producer of platinum group metals (PGMs) with mining and processing operations in south-central Montana in the United States. Planning for the acquisition was announced on December 9, 2016, and the transaction closed on May 5, 2017, after which Sibanye began incorporating Stillwaters operating results into its financial reporting.

The timing of the Stillwater transaction has proven to be opportune for Sibanye, with palladium prices being among the top performing commodities prices in 2017. Should PGM prices remain at current spot levels, Sibanye-Stillwaters U.S. Region will continue to finance its own capital, service the financing costs associated with its purchase, and contribute significant additional cash flow to Sibanye-Stillwaters results.

In its report of its six-month financial results to June 30, Sibanye-Stillwater noted that Stillwater had contributed $28 million in operating profit to its bottom line. The report also stated that Stillwaters Blitz mining project adjacent to its Stillwater mine will begin commissioning ahead of schedule before year-end 2017.

Stillwater also operates its Columbus Metallurgical Complex, including a smelter and base metals refinery, at Columbus, Montana. In addition to processing concentrates from the mines, the complex includes a major PGM recycling operation, recovering palladium, platinum, and rhodium from spent catalytic converters and other industrial sources. In 2016, the company recycled 668,000 oz of these PGMs.

Regarding Sibanye-Stillwaters new name, the companys CEO Neal Froneman commented that the name change represented a natural step in the evolution of the group from a gold mining company with its asset base entirely in South Africa into a significant international precious metals company.

Sibanye entered the PGM business when it acquired Aquarius Platinum in April 2016 and the Rustenburg Operations of Anglo American Platinum in October 2016, both with operations in South Africa.