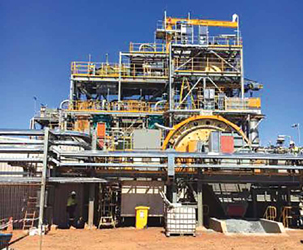 The Tanami Expansion Project included a processing plant upgrade that
improved capacity from 2.3 million mt/y to 2.6 million mt/y.
Newmont Minings Tanami expansion project, which included a second decline and incremental capacity at the processing plant, has achieved commercial production safely, on schedule and at budget, the company said. The expansion is expected to increase Tanamis annual gold production by 80,000 ounces per year (oz/y) to between 425,000 oz/y and 475,000 oz/y of gold, lower all-in sustaining costs to between $700/oz and $750/oz, and extend the mine life by three years.

Tanamis team has more than doubled gold production while cutting costs by about two-thirds and significantly improving resource confidence since 2012. The expansion project continues this trajectory, offering robust returns of 35% at a $1,200/oz gold price, said Gary Goldberg, president and CEO, Newmont Mining. The team also delivered this project safely and on schedule despite a one-month delay caused by record rainfall in the first quarter.

The second decline was completed in mid-2016, enabling a step change in mining rates, which ramp up to 2.6 million metric tons per year (mt/y), and opening new avenues for exploration drilling. Since that time, Tanamis team has improved mine ventilation to support further growth, and increased mine development rates through drilling efficiency gains.