The EcoTails concept filters tailings fast with less machines and adds strength by co-mingling it with
waste rock.
The reality that every refining process faces is that for every product stream, there is a waste stream. Sometimes the reject can be recycled, but with large-scale bulk material handling applications, such as mineral processing, its simply not practical. With mining operations pursuing lower grade deposits, the industry needs a safe and cost-effective solution for tailings storage facilities (TSFs) capable of accommodating a 150,000 metric tons per day (mt/d).

While TSFs have become a limiting factor for some operations, safety and environmental sustainability are also major engineering considerations. On average, over the last 30 years, TSFs have experienced 20 dam failures per decade and a third of them have been serious safety and environmental liabilities. Two regions in the Americas are still recovering from the most recent serious disasters: Mount Polley in British Columbia and Samarco in Brazil.

Many engineers believe the solution involves dry-stacked tailings (DST). The sticking point, however, is the term dry. Traditionally, tailings are transported as a slurry. Any effort to reduce that moisture adds a cost and reduces the effectiveness of the transporting process. On top of that, many mines are operating in arid locations where water is a valuable commodity in its own right.

A little more than three years ago, FLSmidth began looking at ways to improve the dewatering process. The initial fruit of those efforts was the Colossal automatic filter press. It uses high pressure and fast filtering to achieve much larger single machine capacity and optimal cake moisture concentration. It is capable of discharging 20,000 mt/d of filter cake and can recover 600 cubic meters per hour (m3/h) of process water in a relatively small footprint. A large mine with 150,000 mt/d of tailings would require seven to 10 Colossal filters depending on filtration characteristics.

While recovering process water on a massive scale is possible with a significant investment, FLSmidth and Goldcorp began to look for a solution that would provide a step-change for DST. They knew that allowing an increase in the moisture level of the filter cake would reduce the scale and cost of the dewatering solution. The challenge was to give the TSF the required strength that is needed when the higher cake moisture tailings are deposited. The solution was to use waste rock to add the needed strength. The mixing or co-mingling the filter cake with coarse materials on a continuous basis, gave birth to the EcoTails program. 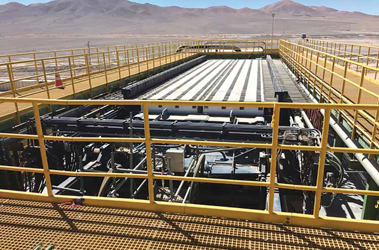 The Colossal automatic filter press can discharge 20,000 mt/d of filter cake and recover
600 m3/h of process water.
If the program works as expected, mines may be able to lower the TSF footprint by 50%, which would significantly reduce environmental liabilities (i.e., faster permitting and reclamation). It would also decrease the mines dependence on an external water supply through better water management techniques. The coarse waste rock particles provide better physical stability for the TSF, greatly reducing the threat of catastrophic failure. Long term, a lower pile permeability would ideally eliminate groundwater contamination and acid rock drainage (ARD).

Seeing the Need for a Step Change
For many years, FLSmidth has been developing machines to support tailings solutions, such as paste thickeners, belt presses, vacuum filters and filter presses. In 2014, we decided to build a really large filter press  Colossal automatic filter press, that is currently being installed in South America, said Todd Wisdom, director of tailings for FLSmidth. That was a major achievement in the evolution of filter presses.

At about the same time, Wisdom recalled a conversation with a mining executive, who said he loved that filter, but commented it was too small. Wisdom reminded him it was twice the size of any filter press currently on the market. He said, Yeah, I know, but we need something bigger and better. At that point, the engineers at FLSmidth realized they needed a new approach.

As point of reference, Wisdom cited a mining operation with some clays in the deposit. To process 150,000 mt/d of filtered tailings, they would have needed 72 2-m x 2-m filter presses. If you tell a mine they need 72 of anything, they are going to get squeamish, Wisdom said. You could cut that figure in half with 36 Colossal Filters, but thats still a big proposition.

The pressure filtration process is a batch operation. So, they started to look at reducing the steps of the batch process. That led to reducing the air blow in a filter for fast filtering with a wetter filter cake. We could reduce that number by half again, Wisdom said. So we went from 72 filters to six or eight and thats much more reasonable for them as far as operations and maintenance.

Reducing the air blow increases moisture, which yields less geotechnical strength for the filtered tailings. During the last six years or so, most mines were looking for filter cake with 13% to 16% moisture on a metallurgical basis, Wisdom said. To get to that level requires quite a bit of air blow. By increasing that figure to 18% to 20%, the filtration time can be reduced significantly, meaning more batches per hour and higher unit capacities. The problem is dealing with that wetter filter cake.

To counter the wetter filter cake, the EcoTails team proposed a method of mixing waste rock to add strength to the composite. Essentially, the EcoTails concept filters fast with less machines and adds strength by co-mingling it with waste rock. We have trademarked two names: EcoTails, which is the project and process, and GeoWaste, which is the composite material  the comingled waste rock with the filtered tails, Wisdom said.

Miners have been co-mingling materials forever, but they have mostly done it on a small scale with trucks and shovels to mix and move materials. That wont work for 150,000 mt/d. Placing the material on a conveyor with some specially designed transfer chutes would work and, at the end of the process, a completely mixed material can be placed on the TSF. Most conveyors are moving material at a velocity of 4 m/second (s) to 6 m/s so there is a fair amount of kinetic energy at the transfer point, Wisdom said. If the system is designed correctly, we can use that energy to mix the materials.

The Advantages of a Less Permeable Pile
In addition to strength, GeoWaste has other advantages. By filling the voids in the waste rock with filter cake, the permeability of the waste rock pile will be greatly reduced. The coarse rock particles give the pile a higher density, which provides quicker self-weight consolidation, adding more strength more quickly in the TSF, Wisdom said.

From a safety perspective, the water on top of the TSF dam and the whole decanting process needs to be removed. On average, the mining industry experiences two TSF dam failures per year. Its not the dam failure that causes the damage, however, its all the water behind the dam that fouls downstream waterways or worse. A dry-stacked TSF can still fail, it will only flow 100 m instead of 100 km. Additional storm water will not accumulate because of the low permeability; the water simply runs over the top.

The lower permeability could also have a long-term positive impact regarding ARD potential. This wont eliminate all ARD, but there are studies that say that if the saturation level of a pile is 85% or more, you can stop ARD, but we havent proven that yet, Wisdom said.

Thickeners recover around 70% of the process water. The filter presses recover much of the rest. EcoTails doesnt remove any more water than traditional filtered tailings, but it can be applied to more mines economically, Wisdom said. The filter cake does contain some water and the mine will need some type of collection point for storm water runoff, but there will not be much seepage because of the permeability of the pile is so low.

Justifying Costs
For a traditional TSF using a rock filled dam, in general operating expenses are estimated at $1.50/mt and the capital expenses are $1/mt. Typically, the water ratios are between 0.5 and 0.7. What we have determined, and we are in the process of performing the pilot scale testing and plant demonstrations to prove this  with the generic EcoTails case, we see operating expenses at $2/ mt and capital expenses $0.50/ton or lower, Wisdom said. That puts this solution on an even keel with traditional systems over the life of a mine.

Moreover, if the mining company is considering a 1-billion-ton reserve, they will be looking at $500 million in capital cost and $2 billion in operating expenses, Wisdom said. While those numbers are a bit staggering, we are going to prove that EcoTails is directly competitive on a total cost basis with conventional wet tailings. They cost the same, but GeoWaste presents less risk and recovers more water and that should be a winner in the marketplace.

Again, the water savings are not any greater than traditional filtered tails, it will just make the process more applicable. The old rule of thumb for filtered tailings, Wisdom explained, was an all-in placed cost of $4/mt. We are trying to cut that significantly, Wisdom said.

Thats a big number and when you combine that with being cost competitive and safer, it seems like a solution that will have some traction for the industry, Wisdom said. More times than not, mining gets a bad rap due to these environmental mishaps. EcoTails could present an environmentally sustainable solution to increase productivity thats economically and socially acceptable.