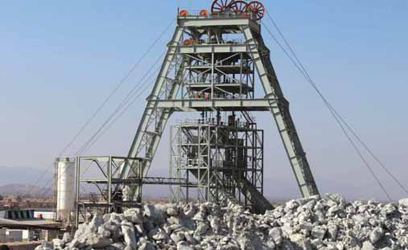 Headgear and infrastructure at Platreef Projects Shaft 1. Excavated rock in the foreground is from
shaft-sinking and underground development. Shaft-sinking is expected to resume in mid-September,
following completion of the initial shaft station at the 450-meter level.
Ivanhoe Mines has released positive results from an independent definitive feasibility study (DFS) for the planned first phase of its Platreef underground platinum group metals (PGMs), gold, nickel, and copper mine and concentrator in South Africa. First-phase development is based on plant throughput of 4 million metric tons per year (mt/y), producing 476,000 ounces per year (oz/y) of platinum, palladium, rhodium and gold (3 PGMs + gold), plus 21 million pounds per year (lb/y) of nickel and 13 million lb/y of copper, in concentrates.

The Platreef project is located on the Northern Limb of South Africas Bushveld igneous complex. The DFS forecasts that the project will be Africas lowest- cost producer of PGMs, with a cash cost of $351/oz of 3 PGMs + gold, net of byproducts and including sustaining capital costs. The estimated preproduction capital requirement is approximately $1.5 billion.

Ivanhoe plans to develop the project in three phases: 1) an initial mining rate of 4 million mt/y to establish an operating platform to support future expansions; 2) a doubling of production to 8 million mt/y; and 3) final expansion to a steady-state 12 million mt/y. The current DFS covers the first phase of development, which would include construction of an underground mine, a concentrator, and other associated infrastructure to support initial concentrate production by early 2022.

Mining zones in the current Platreef mine plan occur at depths ranging from approximately 700 m to 1,200 m below surface. Primary access to the mine will be via a 1,104-m-deep, 10-m-dia production shaft (Shaft 2). Secondary access will be via a 980-m-deep, 7.25-m-dia ventilation shaft (Shaft 1), which is currently under construction. During mine production, both shafts also will serve as ventilation intakes. Three additional ventilation exhaust raises are planned to achieve steady-state production.

Mining methods will include mechanized long-hole stoping and drift-and-fill, with cemented backfill. Ore will be hauled from the stopes to a series of internal ore passes and fed to the bottom of Shaft 2, where it will be crushed and hoisted to surface. Given the size and potential of the Platreef resource, Shaft 2 has been engineered with a crushing and hoisting capacity of 6 million mt/y.

Platreef ore is classified as hard to very hard and is not suitable for semi-autogenous grinding. A multistage crushing and ball-milling circuit has been selected as the preferred size-reduction route. The flowsheet includes a single 4-million-mt/y crushing circuit feeding crushed material to two parallel milling-flotation modules, each with a nominal capacity of 2 million mt/y. Flotation is followed by a common concentrate thickening, concentrate filtration, tailings disposal, and tailings-handling facility.

We now have a clear and defined path forward to initial production and subsequent phases of development, said Ivanhoe Executive Chairman Robert Friedland. We are confident that the Platreef project will benefit all of our stakeholders, including the 20 local communities that are our equity partners, for generations to come.

Ivanhoe Mines indirectly owns 64% of the Platreef project through its subsidiary, Ivanplats, and is directing all mine development work. The South African beneficiaries of the approved broad-based, black economic empowerment structure have a 26% stake. The remaining 10% is owned by a Japanese consortium of ITOCHU Corp.; Japan Oil, Gas and Metals National Corp.; ITC Platinum Development Ltd., which is an ITOCHU affiliate; and Japan Gas Corp.