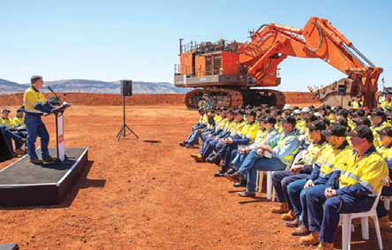 Rio Tinto Iron Ore CEO Chris Salisbury speaks at the grand opening of the Silvergrass iron ore
project in Western Australia.
Rio Tinto officially opened its Silvergrass mine in Western Australia on August 30. The $338 million Silvergrass project is the 16th mine at Rio Tintos iron ore operations and will produce low-phosphorous ore crucial to maintaining Rio Tintos premium Pilbara Blend product. Full commissioning is scheduled before the end of the year and the mine will add 10 million metric tons of annual production capacity to the companys portfolio.

Silvergrass is a great example of our value-over-volume approach in action as the mine will deliver the high-quality, lowcost ore used to maintain the world-class premium Pilbara Blend product our customers love so much, said Rio Tinto Chief Executive J-S Jacques. Silvergrass is a further demonstration of our long-standing commitment to the Pilbara region in Western Australia where weve invested more than $20 billion over the past decade.

Silvergrass is a satellite deposit located adjacent to the Nammuldi mine and is part of the Greater Nammuldi precinct. The brownfields expansion project will lower mine operating costs as a result of the construction of a 9-kilometer conveyor system that will replace traditional road haulage routes linking Silvergrass to the processing plant at Nammuldi.

The strong partnership we have forged with Sinosteel over the past 30 years is one of Australias most significant trading relationships, Salisbury said. It has seen Rio Tinto deliver more than 250 million tons of iron ore to China, undoubtedly helping transform the Chinese economy.