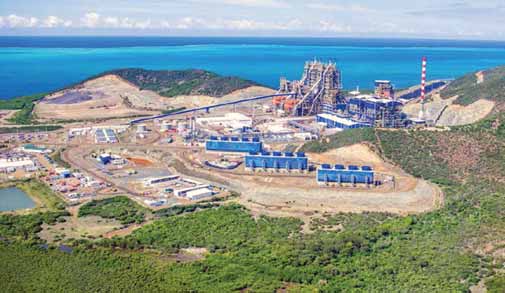 The Koniambo Nickel project is currently ramping up to meet its design production capacity of 60,000 mt/y of ferronickel.
The seven-year project cost venture partners SMSP and Glencore about $7 billion.
French President François Hollande officially inaugurated the Koniambo laterite nickel project (Koniambo Nickel) in New Caledonia on November 17. The project is a joint venture between Société Minière du Sud Pacifique (SMSP) (51%) and Glencore (49%). SMSP is the development arm of the North Province of New Caledonia.

Construction of Koniambo Nickel began in 2007 and included a mine, an ore preparation plant, a metallurgical plant, coal and gas plants, water purification and treatment plants, a power station, a deep-water private port, and an 11-km overland conveyor. Investment totaling $7 billion was majority financed by Glencore. The project is currently ramping up to its design capacity of 60,000 mt/y of ferronickel.

Glasenberg said, We are honored that the French president has recognized Glencores ongoing commitment to and investment in New Caledonia by officially opening Koniambo Nickel. This inauguration marks a milestone for our New Caledonian operations and for the countrys nickel industry. We look forward to continuing our well established collaborations with the local community, the government and our joint venture partners.