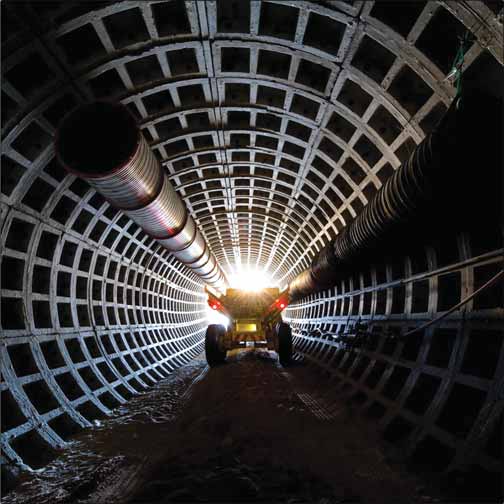 Gem Diamonds began commissioning the Ghaghoo processing plant during the first half of 2014, and the first diamonds were recovered in April. Approximately 2,400 carats had been recovered through the end of June, including one 20-carat and two 10-carat diamonds. During Ghaghoo’s exploration phase, the largest diamond recovered was 7 carats.

Commissioning and optimization of the Ghaghoo treatment plant was ongoing. The plant flowsheet includes a 100-metric-tonper-hour (mt/hr) primary crusher, an autogenous milling and screening section, a 65-mt/h dense media separation module, and a recovery section that uses wet X-ray machines and a grease-belt scavenger unit.

Use of autogenous milling at Ghaghoo represents a break from usual practice at southern Africa’s open-pit diamond mines, which customarily use scrubbers and a combination of crushing circuits to crush the ore. Ghaghoo’s autogenous mill provides greater size reduction and liberation, enabling increased recovery of fine diamonds.

The Ghaghoo mine is accessed via a decline. As of early August, three production tunnels were advancing in kimberlite on the mine’s first production level, 154 m below surface. High volumes of water from basalt fissures had been encountered in one mine area, and besides contributing to difficult mining conditions, necessitated the procurement of additional pumping capacity and the drilling of additional dewatering bore holes.

Three ventilation shafts have been completed. Rescue equipment for deployment in these shafts, for use in the event of an emergency, had been delivered to the mine and was in the process of being commissioned.

Ghaghoo is Gem Diamonds’ second diamond mine. The company also owns the Letšeng mine in Lesotho, which is famous for its production of large, top-color, exceptional white diamonds, making it the highest “dollar-per-carat” kimberlite diamond mine in the world. Since Gem Diamonds’ acquisition of Letšeng in 2006, the mine has produced four of the 20 largest white, gem-quality diamonds ever recorded.