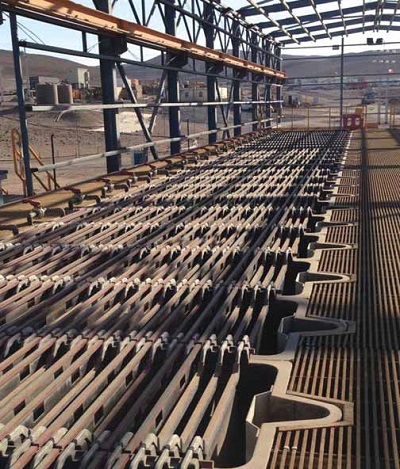 Felipe Velasco, general manager, Pampa Camarones, has managed the project from concept to reality. The project began to take shape when the government’s Mining Development Agency (ENAMI) opened the bid for the Salamanqueja deposit. In 2009, after Minera Pampa Camarones was awarded the rights to develop the mining deposit, Velasco sought and found investors and together they structured a partnership with Samsung. Over the course of its estimated 15-year mine life, it’s expected to produce 700 tons of cathodes per month, or 8,400 metric tons per year (mt/y) of copper.

At the time of E&MJ’s visit in April, construction of the project was approaching completion and Minera Pampa Camarones was preparing for commissioning and startup. At the same time, the company was also planning a third drilling campaign in search of new resources to sustain a longerterm operation. For the medium term, the plan is to grow the capacity of the cathode plant to yield 1,000 tons of cathodes per month.

The entire project, development of the Salamanqueja mine and construction of the Pampa Camarones cathode plant, represents an investment of approximately $70 million. The orebody is property of ENAMI and it was granted to Minera Pampa Camarones S.A. as a lease. The ore will be processed by conventional heap leaching, solvent extraction and electrowinning (SX-EW).

Mining will start in a 2,990-hectare pit area and continue on the surface for about two years before transitioning to underground operations. The company is studying the feasibility of a second underground mine to work other veins on the property.

Drilling, blasting, loading, and haulage is handled by a contractor using three drill rigs, three 2.8- to 3-m 3 excavators, eight 30-mt articulated haul trucks, and two 40-mt dump trucks. The surface mining equipment selection was based on factors such as pit shape and required production levels. The mine also has access to some ancillary equipment, such as a medium-size bulldozer and front-end loader, which is used to prepare the face and maintain the dump area. A motor grader maintains the haul roads. One smaller excavator is equipped with a 2,000-kg hammer to perform secondary reduction after blasting. The mine also has access to a 25-m3 -capacity water truck to control dust on the haul roads.

Haul trucks transport ore directly from the mine to stockpiles where it is fed to a crushing plant. “The SX-EW plant is property of Pampa Camarones, and initially, it will be fed with ore coming from the Salamanqueja mine, and we will also process ores on a toll basis from other ENAMI facilities located in the zone,” Velasco said. “Further, we are also thinking about bringing in supplies from other national and/or foreign mines. 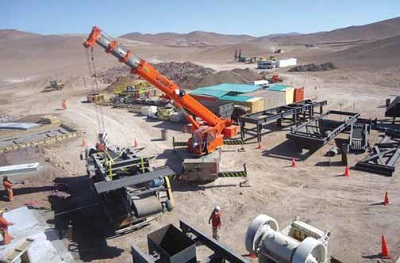 “The vein in the Salamanqueja mine and the Chacota vein form the two core deposits of the project and both of them have oxide on their surface areas,” Velasco said. “The oxide reaches the first 250 m (between elevations 860 and 620). In the lower portion of the veins, there are mixed ores with interesting contents of sulphides, which we are not planning to mine yet.

“The Salamanqueja vein spreads across approximately 4 km and we are planning to focus the production on the center part, which is around 1 km,” Velasco said.

As for the relationship between Pampa Camarones and Samsung, Velasco explained that this is in fact the first involvement of Samsung C&T in the copper production business in Chile, and they are also one of the main shareholders of the company. They will consume all the cathodes that are produced in the plant. The shipments will be dispatched through the port of Arica every 15 days or monthly. The distance between the Pampa Camarones cathode plant and the port is around 90 km.

A Regional Milestone Velasco emphasized the fact that Pampa Camarones is the first copper project of this size to be developed in the Arica-Parinacota Region. To date, the owners have invested more than $3 million exclusively for the geologic exploration of part of this district, and in the future it intends to extend its search for more copper oxide and identify the mineralization at greater depth. “For the region of Arica and Parinacota, this is a flagship project, and we have been careful in its execution so that it can be seen as a sustainable project based on our concern for the water, energy, and mainly for the surrounding community,” Velasco said.

Also, the region is being explored for non-metallic minerals such as boron. The only other significant mining in the region was the Choquelimpie mine, which developed a gold-copper orebody in the Andes Mountains near the Chungará Lake. That mine, however, was closed years ago due to environmental issues.

“What is remarkable about Pampa Camarones is that the whole operation has been designed as a project that looks for sustainability, and that is something that makes a difference when compared with other mining ventures that have been executed in the region,” Velasco said. 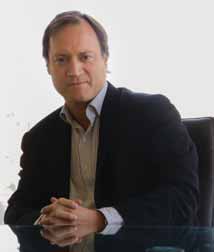 The Water Challenge Pampa Camarones has implemented a proprietary seawater intake and desalinating system. “Being aware that any current mining projects should aim at sustainability and despite the high costs, we decided to use seawater for our overall production process,” Velasco said. “At first, we were offered water rights, which would have been more convenient from an economic standpoint. We assessed the situation and picked the most sustainable option.”

The pumping station for the seawater system is located at Punta Madrid. “It was not selected at random,” Velasco said. “We also analyzed other options such as Caleta Camarones and Caleta Vítor. Ultimately, we preferred Punta Madrid. Although it was more expensive and complex from an engineering perspective, there would be fewer impacts to archeological areas and tourist sites.”

The seawater intake and pumping system was an engineering challenge for Minera Pampa Camarones. The 6-in. pipeline rises from the intake facility through a very tight crag at 1,022 m above sea level and then drops to the plant located 12 km away at an elevation of 860 m above sea level. The system delivers 30 liters per second of water. The water is stored in a 14,000-m3 pond, which is used to irrigate the heaps and also to feed the osmosis plant that obtains demineralized water for the electrowinning (EW) process.

The Punta Madrid pumping station, which was built by Pampa Camarones and Propipe, sits at 350 m above sea level. The seawater is pumped in four stages. Three pumps located at 0, 110 m and 220 m push the water to the Punta Madrid station, then two 450-kW multistage horizontal centrifugal units rated at 94 m 3 /h pump the water to 1,022 m.

“This seawater pumping system required a great deal of effort. It was a real challenge, not only for the resources, but also the engineering and construction constraints we experienced,” Velasco said. “However, we believe that in the future this facility will help increase the water supply in the region rather than extracting water from the area. That’s why we chose this approach to supply seawater for the project.” 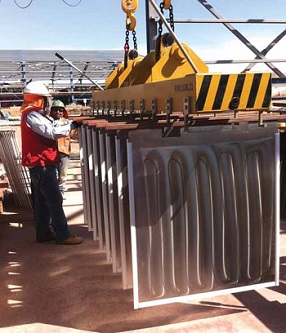 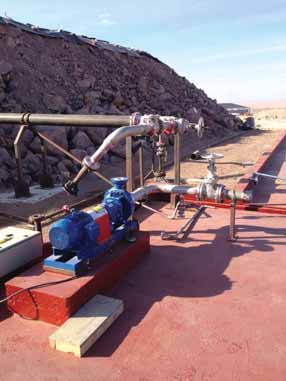 Pumps deliver seawater to the mine site.

Energizing the Project Pampa Camarones has also engaged the community with a commitment for power. The company will build the Vítor power substation in the Camarones zone, which will power the surrounding small towns on a permanent basis and act as a backup for the mine. These towns currently use other power sources. This development in energy alone will bring great forward progress to the zone. An initiative that has been pursued for a long time by the regional government will now become a reality thanks to the copper miners.

For much of its power needs, Pampa Camarones will rely on solar power. “Continuing with our commitment to sustainability, we entered into an agreement with E-CL for the construction of an 8-MW photovoltaic plant. The supply will be entirely consumed by our cathode plant, crushing plant and seawater pumping system,” Velasco said.

The Processing Plant The first stage at the Pampa Camarones cathode plant consists of a crushing and agglomeration plant; downstream are the leach heaps, from which the copper-bearing solution reports to the SX-EW recovery system. Plant design and construction was managed by Pampa Camarones, which worked with several engineering, procurement and construction contractors.

The SX-EW plant and tank farm (TF) were built by Ingeniería Ancor-Tecmin, while Procter S.A. installed all instrumentation and electricity in the plant, and the local Chilean utility company Emelari installed the power poles. Other Chilean manufacturers/suppliers and contractors were involved in key tasks. The crushing plant was built by a Chilean company called Trébol; civil works were carried out by Petra; steel structures were developed by ODR Ltda.; and Propipe S.A. designed, engineered, and built the process pipelines and part of the seawater pipeline as well. M3 S.A. carried out the earthmoving works and built some heaps and water storage ponds. The lining placed in those storage ponds was developed by Incomin Ltda.

Run-of-mine ore is hauled to stockpiles or directly to the crushing plant. Radial stackers place crushed ore onto the leach pads. The heaps are irrigated with water and acid, and the pregnant leach solution is stored in ponds until it is fed to the solvent extraction (SX) process. Subsequently, that solution flows down to the solution heating and TF zone. The circuit ends at the EW area where the cathode harvest process takes place. The cathodes are stripped using an automated process and stored in a cathode warehouse until they are transported to the port.

Velasco explained that, “The construction of the cathode plant took around 14 months to be completed, and it involved a cost of around $48 million. We are beginning the copper processing phase, and we hope to be able to process some 2,000 tons of ore per day.”

A Commitment to Good Mining Practices Even though the region of Arica and Parinacota does not have a mining tradition, and is mindful of certain situations related to bad mining practices in the past, Pampa Camarones has aimed to demonstrate that it is able to develop a mining project that is sustainable with the environment and the community.

“We have made a commitment with the community of Camarones, so that they don’t see us as a mining company, but as good neighbors. For that purpose, we have made arrangements with the municipality to support any efforts aimed at rescuing the traces of the Chinchorro culture, a culture of impressive historical, archeological and heritage value for our country,” Velasco said.

Pampa Camarones has established a transparent, open-door policy for the authorities, the community, and even those organizations that have shown opposition to the project and to the overall mining development in the region. As a part of this policy, the company has invited these organizations to learn more about the project by visiting the site to see the measures that are being adopted to generate as few environmental impacts as possible. Also, these representatives have been invited to learn more about the use of seawater in the operations and to understand the energy that will feed the mine is going to come from non-conventional renewable energy supplied by a photovoltaic plant.