CONSOL Energy Dedicates BMX Mine in Honor of Harvey 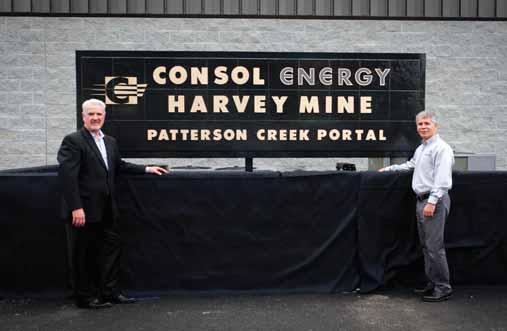 Brett Harvey (left) and Nick Deluliis officially open the Patterson Creek Portal in Pennsylvania.
CONSOL Energy Inc. celebrated the company’s 150th anniversary and hosted a dedication ceremony at its Bailey Mine Expansion (BMX). The BMX mine has been renamed the Harvey mine in recognition of the leadership of J. Brett Harvey, who was recently elected executive chairman of CONSOL Energy’s board of directors after 16 years with the company as president, chief executive officer and chairman.

“He navigated the company through significant challenges he inherited when he arrived in the late 1990s, and made CONSOL the premier energy company that it is today,” said Nick DeIuliis, CONSOL Energy president and chief executive officer. “Brett’s legacy will be defined, not only for the way he deftly guided CONSOL through one of the most significant chapters in our long history, but for the example he set and importance he placed on our core value of safety above all else.”

He added, “Today, Brett Harvey joins Ralph Bailey as the greatest leaders this company has ever known. Our company, and the entire industry, is better off today because of Brett’s unwavering commitment to the safety of the men and women who work underground every day to provide society with the comforts we all enjoy.”