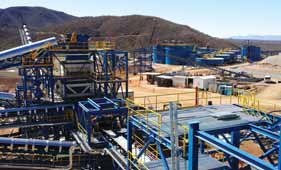 The Santa Elena mill during late-stage construction.
(Photo courtesy of SilverCrest Mines)
SilverCrest Mines reported in mid-June that commissioning of the new, 3,000-mt/d mill and processing plant at its Santa Elena silver-gold mine in Sonora, Mexico, was on track to achieve design capacity by early August. The new CCD/Merrill Crowe plant is the key element of a three-year program to transition Santa Elena from an open-pit, heap leach operation to underground mining. At full production, the plant will produce about 1.5 million oz/y of silver and 32,800 oz/y of gold.

Underground development was ongoing, with more than 4,500 m completed on ramping, ventilation and ore development on five levels. Approximately 53,000 mt of development ore had been mined, with 41,500 mt delivered to the leach pad and 11,500 mt grading 1.17 g/mt gold and 98 g/mt silver in the stockpile awaiting mill processing.

SilverCrest was forecasting Santa Elena’s 2014 production at 3.3 million to 3.6 million silver equivalent oz. It will review its market production guidance for possible changes once mill commissioning is complete and underground production is fully under way.