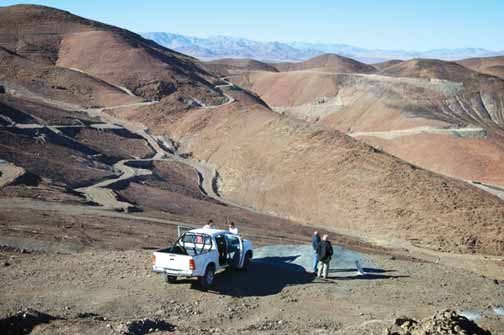 The feasibility study forecasts that copper production at Santo Domingo will average 248 million lb/y during the first five years of full operation. Average life-of-mine production is forecast at 128 million lb/y of copper in concentrate, 4.2 million mt/y of iron concentrate, and 16,000 oz/y of gold in the copper concentrate. Mine life is projected at 18 years, with operations expected to begin two years after a final construction decision.

KORES has committed to off-take agreements at market pricing for 50% of production of copper and iron concentrates.

The Santo Domingo project will include two open-pit mines using conventional drilling, blasting, loading with diesel hydraulic shovels, and truck haulage. A concentrator will be designed to process a nominal 65,000 metric tons per day (mt/d), reducing to 60,000 mt/d in the latter years as the ore becomes slightly harder. The concentrator will incorporate SAG and ball milling and conventional flotation utilizing seawater to produce a copper concentrate. Magnetite iron will be recovered from the copper rougher tailings using low intensity magnetic separation.

The Santo Domingo mine and concentrator will be located 50 km southwest of Codelco’s El Salvador copper mine and 130 km north-northeast of Copiapó. The elevation at the site varies between 1,000 and 1,280 m above sea level, with relatively gentle topographic relief. Access to the project is 1 km off paved highway C-17 from Diego de Almagro to Copiapó.

Over the course of the next 10 months, Capstone will focus on advancing Santo Domingo project engineering; working with regulators and communities to obtain approval for the environmental impact statement filed in October 2013 and to secure the required social license; securing a long-term power purchase agreement; developing detailed marketing studies; securing the port concession; developing a robust project execution plan, including assessment and selection of available EPC and EPCM options for the construction of all or portions of the project; and assessing project and corporate financing alternatives.