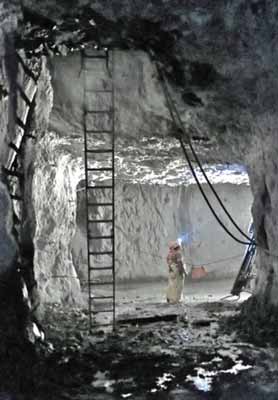 Permitting is under way for an underground mine at Brucejack that
will employ long-hole stoping and cemented paste backfill.
(Photo courtesy of Pretium Resources)
Pretium Resources has announced the results of an updated NI 43-101-compliant feasibility study of its high-grade, underground Brucejack gold-silver project in northern British Columbia. Tetra Tech completed the study update, which primarily reflects more current metals prices, a more current U.S. dollar:Canadian dollar exchange rate, and the December 2013 mineral resource estimate for the Valley of the Kings deposit.

The operating parameters contemplated for the project are fundamentally unchanged from the project’s June 2013 feasibility study.

Estimated capital cost to develop the Brucejack project has increased by 12.6% to $746.9 million in U.S. dollar terms, reflecting the depreciation in the Canadian dollar and power, camp size, temporary facilities, water and sewerage treatment, waste disposal, and owner’s costs.

Additionally, experience gained mining and processing a 10,000-metric-ton (mt) bulk sample from the Valley of the Kings and operating the site year-round for three years is reflected in the study, both on a technical and economic basis.

Brucejack is planned as a high-grade, underground mining operation using longhole stoping and cemented paste backfill. The Valley of the Kings deposit—the higher-grade, primary targeted deposit—will be developed first. The lower-grade West Zone deposit will be developed in the second half of the project’s 18-year mine life.

The Brucejack project is planned to operate at a processing rate of 2,700 mt/d, mining a total of 16.5 million mt of ore at an average mill feed grade of 14.1 g/mt gold. Mineral processing will be based on conventional gravity concentration and sulphide flotation, producing gold-silver doré and gold-silver flotation concentrate. Lifeof-mine production is estimated at 7.27 million oz of gold and 27.63 million oz of silver, including the gold and silver recovered in the flotation concentrate.

In consideration of the current permitting status of the project and the updated construction timeline contemplated in the feasibility study, Pretium now anticipates that commercial production at Brucejack will begin in 2017. The company will begin evaluating financing options in the fall of 2014.

“Brucejack will be a high-grade, lowcost producer with average annual production of more than 500,000 oz of gold in the first eight years,” Pretium President and CEO Robert Quartermain said. “Even in an uncertain gold price environment, Brucejack can deliver high margins, and from a safe jurisdiction.”