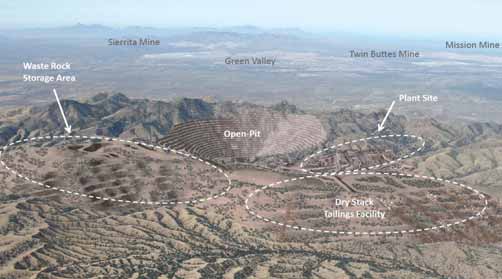 Augusta Resource Corp.s primary asset is the Rosemont copper-molybdenum project located 50 km southeast of Tucson,
Arizona, USA. Augusta estimates the Rosemont deposit contains 7.5 billion lb of copper in measured and indicated,
5.9 billion lb in proven and probable and 1.1 billion lb in inferred resources.
Hudbay Minerals and Augusta Resource Corp. announced on June 23 an agreed transaction whereby Hudbay will acquire Augusta for Hudbay shares and warrants that value Augusta at about C$555 million. The agreement ended Augusta’s four-month resistance to an unsolicited Hudbay takeover effort that began in February with an all-share offer that valued Augusta at about C$540 million.

Augusta Executive Chairman Richard Warke had characterized Hudbay’s initial offer as “grossly inadequate.” However, the project has had to deal with permitting delays, and the potential for additional delays growing out of the sighting of an ocelot in or near the Rosemont project area in late May (E&MJ, June 2014, p. 10) has taken some of the gloss off the property.

Augusta’s board of directors unanimously recommended that Augusta shareholders accept Hudbay’s revised offer. Warke said, “After a thorough process to consider all of our alternatives, we are pleased to have agreed on a mutually beneficial transaction representing a successful conclusion to our value maximizing process...Our agreement with Hudbay provides Augusta shareholders with an attractive premium for their shares and a stake in a growing intermediate base metals mining company with a portfolio of producing mines and development projects, including the worldclass Rosemont project.”