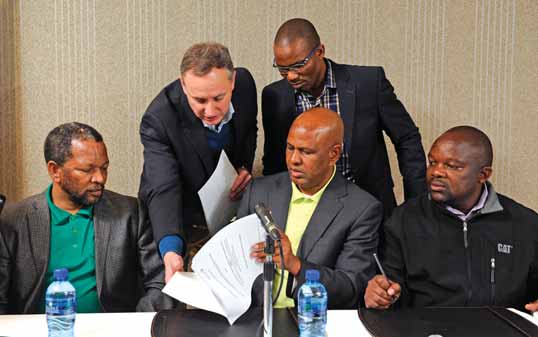 Joseph Mathunjwa and Jeff Mphahlele of the Association of Mineworkers and Construction Union sign the strikeending
miner wage agreement with Terence Goodlace, Nelson Ndlala and Mathias Sithole of Implats
South Africa’s major platinum producers— Anglo American Platinum, Impala Platinum and Lonmin—and the Association of Mineworkers and Construction Union (AMCU) signed wage agreements on June 24, ending a strike by an estimated 70,000 AMCU members that began on January 23. Workers began returning to the mines on June 25; however, resumption of full operations could take up to three months, or perhaps longer.

The companies signed separate threeyear agreements with the union, which differed marginally as a result of each company’s particular circumstances. The agreements were effective from July 1, 2013, for Anglo American Platinum and Impala and from October 1, 2013, for Lonmin and will run until June 30, 2016.

Mine employees whose basic wage is less than R12,500 a month will receive annual increases of R1,000/month for the first two years of the agreements. At Lonmin, the same increase will apply in the third year, while at Anglo American Platinum and Impala, the increase in the third year will be R950/month. (The Rand:U.S. Dollar exchange rate at the time of the settlement was about R10.6:$1.)

Employees currently earning R12,500/ month or more, or whose basic rate reaches that amount during the course of the agreement, will receive an 8% increase for the first year of the agreement and 7.5% thereafter.

The settlement also included agreements regarding back pay, fringe benefits, and living-out allowances.

In a joint statement, CEOs Chris Griffith of Anglo Platinum, Terence Goodlace of Impala, and Ben Magara of Lonmin said, “The road ahead remains a challenging one, and it will take some time for our operations to resume full production, with the safety and wellness of employees being paramount. This is at a time when the platinum market remains subdued, and operational profitability remains constrained.”

Issues that will require the companies’ attention include: assessing and improving the health and wellness of employees and undertaking necessary operational and safety training; restoring the physical environment in the affected mining areas and processing plants and remedying any conditions that may have deteriorated during the lengthy period that they were not in operation; rebuilding relationships and trust between employees and management; assisting employees in stabilizing their wellness and financial well-being, and addressing in particular the high levels of indebtedness that may have accrued during the period of the strike; and restocking the metals pipelines.

While the CEOs’ response to the settlement was subdued, AMCU president Joseph Mathunjwa and AMCU members were for the most part jubilant, regarding the settlement as a clear win. The union did not achieve its initial inflexible demand of a R12,500/month base wage for all employees; however, by the end of the three-year agreements, a significant number of union members will be earning R12,500/month, and the entry level base wage will be no less than R8,000/month.