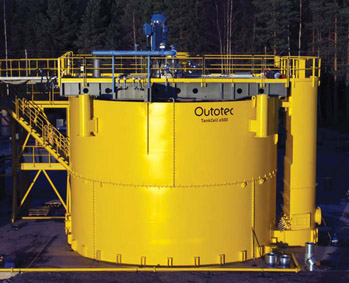 To address the mineral processing market’s demand for increased capacity and volume, Outotec developed a “mega” size flotation cell, and announced recently that the first of these large units, the TankCell e500 cell, will be installed at First Quantum Minerals’ Kevitsa operation in Finland. According to the company, it is one of the world's largest flotation cells with an effective volume of more than 500 m 3 .

“The TankCell e500 will provide significant additional capacity and flexibility to the Kevitsa flotation flowsheet without taking up significant real estate. The net result is efficient use of capex and, going forward, opex,” said Anthony Mukutuma, plant manager at FQM Kevitsa Mining Oy.

Outotec previously delivered grinding mills, filters, thickeners, an automation package and flotation cells to Kevitsa during its construction phase, and the project has, in total, 68 Outotec TankCells, 14 of which are large 300-m3 machines. The new TankCell e500 was preassembled at a workshop in Finland and tested there for mechanical and fluid dynamical performance.

According to Outotec, the TankCell e500 was developed specifically for projects with high material throughput rate, where capacity demands would necessitate an excessive number of smallercapacity units. Typical applications for the TankCell e500, the company explained, are large copper and gold operations.

Outotec’s technical literature lists a number of design improvements that have been incorporated into the large TankCells, including its FloatForce mixing technology that provides superior flotation performance from a new rotor and stator design. The FloatForce rotor, with separated areas for pumping and air dispersion, provides efficient pumping even with the highest air feed rates, enabling maximum performance with low power draw, Outotec explained.

Other design features include a unique internal double launder design that provides adequate froth lip length with minimized froth transport distance and enables an easy tailoring for every process need, particularly at sites where large flows and large volumes produce a lot of froth.

Outotec said its FlowBooster auxiliary impeller can be installed on a TankCell e500 for processes that require extra pumping. FlowBooster is designed to increase mixing in the cell significantly with only a small increase in power draw.

The TankCell e500’s internal dart valve design allows flexible installation of one to three valves to enable optimized level control for all applications. Long-stroke actuators guarantee exact control, while the simple design of the valve arrangement inside the tank allows easy maintenance.

All Outotec TankCell flotation machines can now be equipped with the Outotec EIT (electron impedance tomography) level measurement system that the company claims provides exact measurement in all process conditions without need of moving parts.