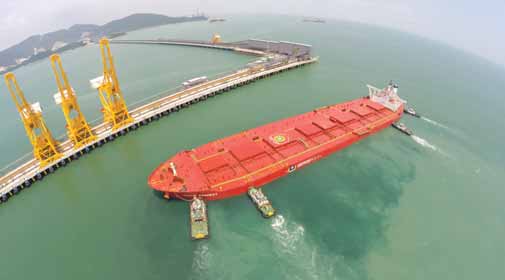 A Valemax-class vessel is maneuvered into position for docking at Vale’s new Teluk Rubiah iron ore terminal in Malaysia.
The $1.3 billion project can handle 30 million metric tons per year (mt/y) of iron ore. (Photo courtesy of Vale)
Vale’s Teluk Rubiah Maritime Terminal and iron-ore distribution center, currently commissioning in Malaysia, received its first Valemax iron ore carrier, the Berge Everest, on March 24. The vessel’s arrival marked an important milestone as Vale looks toward completion of the distribution hub by the second half of 2014.

The Berge Everest embarked from Brazil on its maiden voyage to Malaysia loaded with 382,500 metric tons (mt) of iron ore. The unloaded ore will be stored in the distribution center for future commercial shipments.

With a total investment of $1.371 billion, Teluk Rubiah is a cornerstone of Vale’s strategy of investing in high-efficiency, integrated production and logistics systems to enhance the company’s capabilities to generate customized products for its clients in Asia and Southeast Asia. “This is a further major step taken by Vale toward the consolidation of its distribution strategy for Asia,” José Carlos Martins, Vale’s executive director for Ferrous and Strategy, said.

The Teluk Rubiah facilities comprise a deep-water jetty and an onshore stockyard where different types of iron ore can be blended and customized to the needs of regional steelmakers. When completed, the first phase of the distribution center will have capacity to handle 30 million mt/y of iron ore.

As of February, Valemax vessels had performed 170 unloading operations in 10 different ports around the world, as well as at two floating transfer stations in the Philippines. Vale has to date exported about 56 million mt of iron ore using the vessels. Currently, there are 30 Valemax ships (owned and chartered) in operation.

The Valemax vessels are the world’s largest iron ore carriers, with capacities of 400,000 deadweight mt.