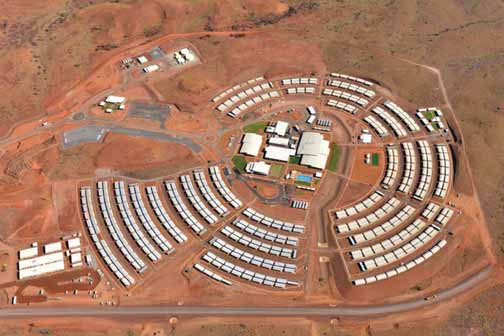 The Roy Hill mine will have a mine life of more than 20 years, using conventional open-pit, drill-and-blast, truck-and-excavator mining at an average strip ratio of 4:1. At full production, the mining rate will be approximately 68 million mt/y of run-ofmine ore, for total material movement of about 350 million mt/y. Multiple pits will be in production at any given time, with each pit being broad and relatively shallow. The deepest pit will be less than 110-m deep.

Run-of-mine pads and crusher stations will be located in close proximity to each pit, with the crushed ore then conveyed to the processing plant. Three crushing stations will be in operation at any one time.

To support mine construction and operations, Roy Hill is constructing an airport to allow easy access for fly-in, fly-out workers and an operations village for 1,200 operational staff and contractors.

In December 2013, the Export-Import Bank of the United States authorized a $694.4 million loan to Roy Hill contingent upon the purchase of U.S. mining and rail equipment from Caterpillar, GE and Atlas Copco.