Columbus Gold Likes What it Sees in French Guiana 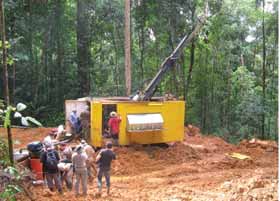 First, French gold producer Auplata SA has received required authorizations to construct and operate a centralized cyanide plant to treat gold gravity concentrates from its various mines and mining sites in French Guiana. Auplata reported that it ultimately intends to establish cyanide plants directly at its mine sites.

Second, on February 24, the French government announced it plans to invest up to €400 million ($548 million) in a new stateowned mining company to explore for gold in French Guiana and for rare earths and specialty metals in France and around the globe. The new company is to be built upon the same model as Japan’s JOGMEC, which offers financial support to private-sector Japanese resource ventures worldwide.

Columbus Gold CEO Robert Giustra said, “These developments are a clear message from the French government that it is committed to developing the vast mineral wealth potential of French Guiana, particularly gold mining. It’s an essential and very positive development for Columbus Gold in particular, as it greatly increases the level of confidence with respect to the development of our Montagne d’Or gold deposit.”

The resources are defined within a gold mineralized area measuring 2,250 m by 400 m and to an average depth of 250 m from surface. The mineralized zones remain open in part along strike and at depth.

Drilling is ongoing at Montagne d’Or and is being funded by Nord Gold N.V. as part of a three-year, minimum $30 million exploration and development program pursuant to which Nord Gold can earn a 50.01% interest in Montagne d’Or and certain Paul Isnard mineral claims by completing a bankable feasibility study.

The Paul Isnard gold project is located in northwest French Guiana, 180 km west of the capital, Cayenne. The Paul Isnard project occurs within the Guiana Gold Belt, which stretches from western Venezuela eastward through Guyana, Surinam, and French Guiana and into Brazil.