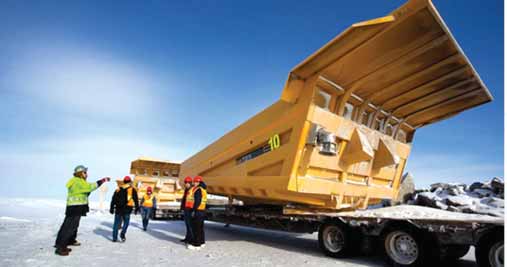 A shipment of haul truck bodies arrives at the Gahcho Kue’ diamond mine—one of almost 800 freight deliveries
expected by the end of March. (Photo courtesy of De Beers)
De Beers and Mountain Province Diamonds reported in late March 2013 that, contrary to news reports, their Gahcho Kué diamond project in Canada’s Northwest Territories remains on schedule for first production in the third quarter of 2016. The project is a joint venture between De Beers Canada (51%) and Mountain Province (49%). De Beers confirmed that there had been no change in the project schedule and that “both partners are happy with the progress to date.”

Approximately 120 people were on site, and this number was expected to increase through the balance of the year. At peak construction, approximately 700 people will be employed at Gahcho Kué. Work to date has been completed without any losttime injuries.

Construction of the main Gahcho Kué airstrip has begun, and prefabricated units of the main camp have been delivered. The main camp and airstrip are expected to be ready for use by mid-2014.

The Gahcho Kué project consists of a cluster of four diamondiferous kimberlites, three of which have a probable mineral reserve of 31.3 million mt grading 1.57 carats/mt for total diamond content of 49 million carats. Mine planning calls for three open pits to be mined sequentially. The mine has an estimated 11-year life, with an average of 4.5 million carats to be extracted annually from approximately 3 million mt/y of mined kimberlite.