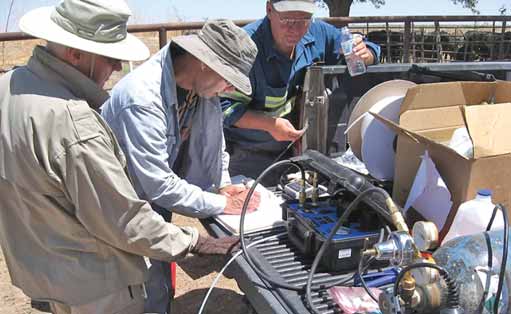 A crew analyzes water samples at the site of IC Potashs Ochoa project, which is scheduled to begin construction in
mid-2014 with an estimated cost of more than $1 billion. (Photo courtesy of IC Potash Corp.)
IC Potash Corp. has published the final feasibility study and announced completion and publication of the environmental impact statement (EIS) for its Ochoa potash project 60 miles east of Carlsbad, New Mexico. As of early March, the company was anticipating receipt of a Record of Decision from the U.S. Bureau of Land Management in April and start of project construction during the second quarter of 2014.

Capital cost to develop the Ochoa project is estimated at $1.018 billion, with a payback period of 5.4 years. The financial model provides for approximately three years of construction and commissioning, followed by 50 years of operation. Sulphate of potash (SOP) production in 2017 is estimated at 48% of annual capacity, with full capacity of 650,000 metric tons per year (mt/y) expected in 2018.

The Ochoa project feasibility study is based on just more than 1 billion st of measured and indicated resources at an average grade of 83.9% polyhalite by weight. The resource bed is located approximately 1,500 ft below surface, dips at less than 1%, and ranges in thickness from 5.2 to 6.5 ft. Resource calculations were constrained by a minimum polyhalite thickness of 4 ft and a minimum resource grade of 65% polyhalite.

Contained within the mine plan are approximately 182.4 million recoverable st of proven and probable reserves grading 78.05% polyhalite. Room-and-pillar mining using continuous mining equipment will extract ore from the deposit at a nominal rate of 3.7 million st/y.

The mine will be accessed via a 25-ftdiameter, 1,525-ft-deep, two-compartment mine ventilation and service shaft and an 8.5°, 12,000-ft-long decline. The shaft will have an intake air compartment equipped with an emergency escape hoist and cage as well as electrical high-voltage and communication cables. The second compartment will be used for return air and will contain fresh water and mine discharge water piping to prevent freezing during the winter months.

General mine ventilation will be accomplished with dual 11-ft fans installed in parallel on the return side of the shaft.

The decline will have flexibility to accommodate increased underground production as needed. Ore will be transported to the surface via a 60-in. decline conveyor with a capacity of 4,000 st/hr. A 12-ftwide vehicle roadway will provide mine access for mining equipment, personnel and supply transport.

The surface processing plant will process a continuous stream of polyhalite ore into finished SOP products. The main processing circuits will include crushing and washing, calcination, leaching, evaporation and crystallization, drying, and granulation. In conjunction with the crushing phase, washing will remove sodium chloride from the ore and ensure a high-quality, appropriately sized feed to the calciner.

Fluid-bed calciners will provide precise temperature control and cause the ore to become readily soluble in water. A twostage, counter-current leach circuit will produce brine containing potassium and magnesium sulphates. This brine will be fed to the evaporation and crystallization circuits where SOP will be crystallized. Following crystallization, drying and granulation of the crystals will produce the final products.

The Ochoa project is located in the Carlsbad potash region of southeast New Mexico, which has a 90-year history of potash production. The Mosaic Co. and Intrepid Potash are currently active producers in the region.