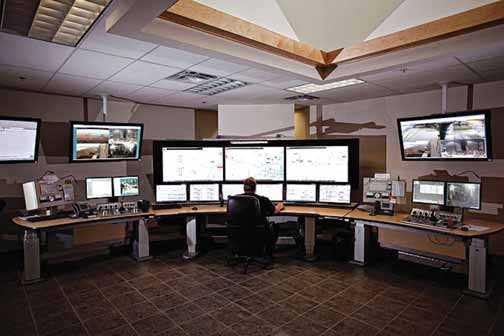 Vale describes the recently opened Totten operation as ‘…the mine of our future, utilizing some of the best
technology, automation and environmental management in the mining industry.’ (Photo courtesy of Vale)
Vale celebrated the official opening of its Totten mine on February 21, after seven years of development and a budget of more than $700 million. Approximately 500 people were employed at the site during peak development periods.

At the mine’s opening ceremony, Peter Poppinga, president and CEO of Vale Canada and Vale’s executive director of base metals and information technology, said, “Totten mine is Vale's first new mine in the Sudbury Basin in more than 40 years and represents a significant investment in the future of our operations in Ontario and across Canada.”

Located in Worthington (approximately 40 km west of Copper Cliff), the mine is now in operation and will employ approximately 200 people. It will produce copper, nickel and precious metals over the next 20 years.

Vale said the new mine features the latest in mine technology and safety automation, including a wireless underground communication system and location tracking on mechanical and personal protective equipment. Vale said it has also incorporated industry-leading environmental features in its design to minimize its operating footprint and impacts on the surrounding area.

“Totten mine represents the future of mining for Vale's Sudbury operations,” said Kelly Strong, vice president of Ontario and U.K. Operations at Vale. “It’s an extraordinary facility built by a dedicated team of mining professionals and represents an accomplishment our company and community can be very proud of.”