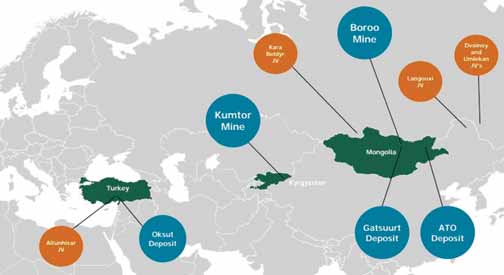 Location map of Centerra Gold’s global property and mine assets.
Centerra Gold has completed a preliminary economic assessment (PEA) of its 100% owned Öksüt project in south-central Turkey. The PEA envisions a conventional open-pit and heap leach facility with an expected total of 34 million mt of ore to be stacked at a maximum rate of 11,000 metric tons per day (mt/d).

Potential Kumtor Ownership Restructuring: In other news, Centerra reported on February 6, that the parliament of the Kyrgyz Republic had adopted a resolution after completing a review of a previously announced non-binding heads of agreement among Centerra, the government of the Kyrgyz Republic, and Kyrgyzaltyn JSC in connection with a potential restructuring transaction. In the transaction, Kyrgyzaltyn JSC would exchange its 32.7% equity interest in Centerra for a 50% interest in a joint-venture company that would own the Kumtor gold mine.

Kyrgyzaltyn JSC is a joint-stock company wholly owned by the Kyrgyz Republic. The Kumtor mine is located in the Tien Shan Mountains 350 km southeast of the Kyrgyz capital of Bishkek and accounts for about 12% of the country’s GDP. Centerra is forecasting that the mine will produce 550,000 to 600,000 oz of gold in 2014 at all-in costs of $833 to $909/oz.

Potential restructuring of Kumtor ownership has been the subject of discussion and some disagreement within the Kyrgyz government since September 2013.

“Any definitive agreement for a potential restructuring remains subject to required approvals in the Kyrgyz Republic, including Government and Parliament of the Kyrgyz Republic, as well as Centerra Special Committee and Board approval, and compliance with all applicable legal and regulatory requirements and approvals, including a formal independent valuation and shareholder approval.”