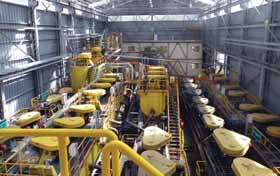 Flotation circuits at the Santander zinc-lead-silver project.
(Photo courtesy of Trevali Mining)
Trevali Mining’s Santander zinc-lead-silver operations in Peru achieved commercial production in February. According to a company announcement, the Santander mill was operating consistently and without significant interruption at production rates exceeding 70% of design capacity and was producing concentrates that met saleable concentrate specifications. Mill throughput was being ramped up to nameplate capacity of 2,000 mt/d.

The underground Santander mine is located about 200 km by road northwest of Lima. The project is being developed under an agreement between Trevali and Glencore International, whereby Trevali retains 100% ownership, while Glencore has built and is operating the processing plant to produce zinc and lead-silver concentrates. Glencore is also responsible for supervision of the contract mining operations and has entered into a long-term concentrate offtake agreement for 100% of Santander’s concentrate production.

With Santander now in commercial production, Trevali has shifted its development focus to its New Brunswick operations in Canada, where it is preparing the Caribou mine and mill complex for startup.