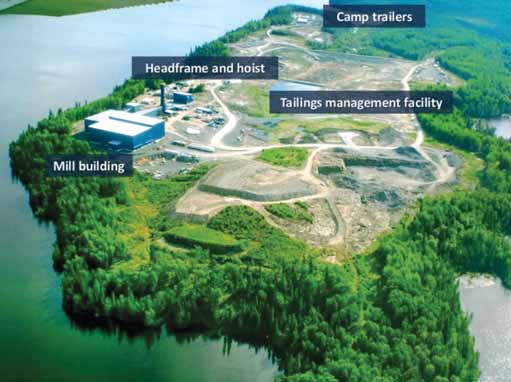 Rubicon Minerals continues to move ahead on its Phoenix gold project in Ontario, and recently announced that shaft
sinking had been completed in late 2013. The property is shown here under construction in October 2013.
(Photo courtesy of Rubicon Minerals)
In a project update issued February 21, Rubicon Minerals reported that it completed shaft sinking at its Phoenix gold project in the Red Lake district of Ontario in mid-December 2013. The project is expected to produce an average of 165,300 oz/y over a mine life of 13 years. Diluted head grade to the mill will be 8.1 g/mt gold, mill throughput will be 1,900 mt/d, and all-in sustaining costs are estimated at $805/oz.

The new Phoenix shaft has a total depth of 730 m below surface. The installation of a loading pocket on the 337-m level from surface is complete, allowing Rubicon to expedite underground lateral development on the 122-m, 244-m and 305-m levels. Two 10-mt skips and two cages for personnel transport have been installed. The company also will install a 10-mt loading pocket at 685 m below surface and is planning lateral development on the 610-m level.

Lateral development has been initiated on the 244-m level to provide for diamond drill stations. Vertical development on the 122-m and 305-m levels also has begun and will provide access for the ventilation system expansion.

A headframe and 2,500-hp hoist have been commissioned, and construction has been completed for required roads, a 200-person camp, a new power line and substation, the mill building, and the SAG and ball mill foundations.

Rubicon is deferring completion of the mill until it has secured the remaining financing required to complete the project. The company has entered into a $75 million gold stream agreement with Royal Gold and estimates it will need to raise an additional $100 million to complete the project. It expects to begin production approximately 12 to 14 months following completion of the additional financing.

Under the gold streaming agreement with Royal Gold, Rubicon will deliver 6.3% of any gold produced from the Phoenix project until 135,000 oz have been delivered and 3.15% thereafter. Royal Gold’s purchase price/oz will be 25% of the spot price at time of delivery.