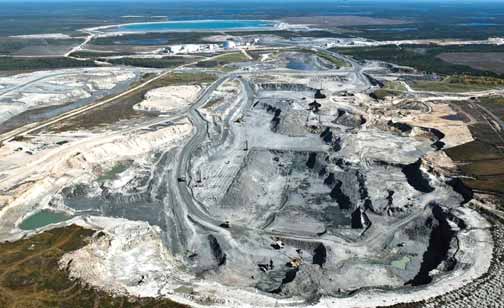 Detour Lake mining rates are expected to average 252,000 mt/d in 2014 and increase to a peak of 389,000 mt/d in 2020. The haulage truck fleet is projected to increase from the current 23 trucks to 41 trucks at the peak of the mine operation from 2026 to 2031, with no additional shovels beyond the current two electric rope shovels and three hydraulic shovels. The mining fleet will be supported by two smaller shovel/excavators.

Detour Gold continues to stockpile material grading between 0.4 and 0.5 g/mt gold, estimated at 107.3 million mt averaging 0.45 g/mt gold over the life of the mine. This ‘mineralized waste’ is not included in the mineral resources or in the current mine plan. It could potentially be processed at the end of the mine life, depending on the gold price environment.

Regarding the new Detour Lake life-ofmine plan, Detour Gold COO Pierre Beaudoin said, “The mine plan reflects our operating experience gained during the past two years in pioneering the pit and, over the past year, operating the process plant. The mine plan optimizes the first five years, while addressing our operational risks.”