A Promising New Development in Coal Analysis
By Richard Woodward 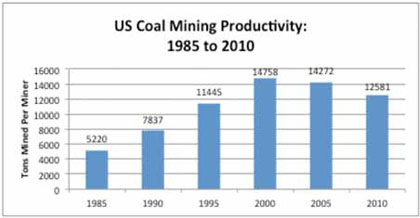 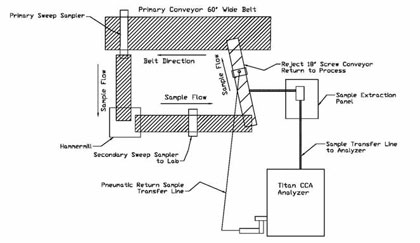 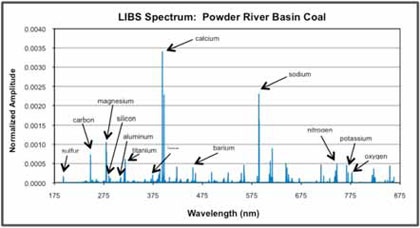 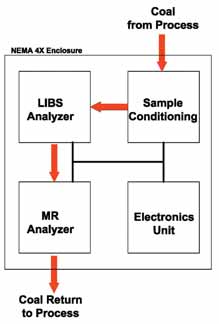 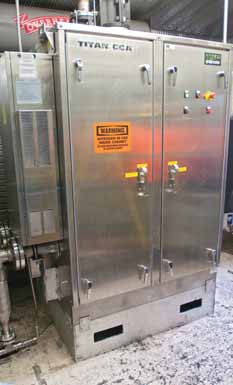 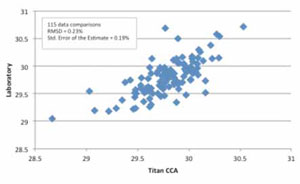 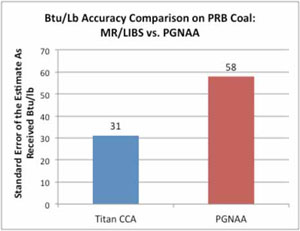 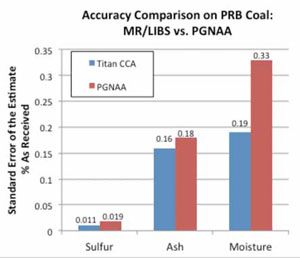 Figure 6g: Comparison with PGNAA on sulfur, ash and moisture.

Productivity growth in the U.S. coal industry from 1985 to 2000 was remarkable, from about 5,200 tons/ miner per year in 1985 to almost 15,000 tons/miner per year in 2000, a compound annual growth rate of almost 8% per year (See Figure 1). Admittedly, some of those efficiency gains can be attributed to the Powder River Basin’s increasing share of production and its scale advantage. Yet, productivity growth of 8% is hard to ignore. What’s equally remarkable is that this growth occurred without any significant break-throughs in mining technology.

Everything that characterized state-of-the-art mining equipment in 2000— from longwalls to heavy media cyclones to high-speed rail loadouts—already existed in 1985, although belt speeds and haul truck capacities continued to increase, and mines derived improved efficiencies from technologies such as GPS tracking and wireless communica-tion. However, productivity declined in the first decade of the 2000s and that is to some extent reflective of the rela-tive lack of innovation and/or the increased regulatory environment.

That same plateauing occurred in the sampling and analysis part of the coal industry. There haven’t been any breakthroughs in sampling since the sweep-arm sampler; lab analysis equip-ment is essentially the same as it was in 1985; and online analyzers have experienced only incremental improve-ment as well over that time period. However, based upon some recent field results at a large western U.S. coal mine, that drought in innovation may be about to end.

Mines Need Timely Information
In early 2010, a Powder River Basin (PRB) mine decided it was worth the risk to try out a new online coal analy-sis technology. Like most PRB produc-ers this mine works two areas of the pit simultaneously. Despite the widely-held perception that coal quality is consistent at a given PRB mine, there can be enough variation, especially in today’s highly competitive market, to warrant an online analyzer to monitor and respond to real-time trends.

This mine has two adjacent truck dumps from where the coal is trans-ported directly to the four loadout silos by a 60-in. conveyor at rates of 3,000 to 6,000 t/h. A two-stage sweep-arm sampling system is installed on this belt to determine the coal quality enter-ing the silos. Physical samples are taken every three to four hours and sub-jected to both quick and ASTM analy-ses. The quick analysis results (sulfur, ash, moisture and Btu/lb) are available approximately three hours later. The ASTM results arrive up to 24 hours after the sample was taken. For the mine to respond to even the quick analysis, it is reacting to data that is on average almost five hours old.

The need for online analysis was clear. Not only could a coal analyzer provide prompt coal quality data to pit operations for corrective action, it could also give the control room operator advance warning of impending prob-lems in satisfying the contract specs of an upcoming train. Moreover, not only was the quick lab analysis not really all that quick, it also failed to include an analysis of the Na2 O fraction in the ash, itself a criterion for rejecting a train.

A New Solution
The new online analyzer that this mine decided to test could not only detect the low levels of Na 2 O that other online analysis technologies cannot, but it could also measure moisture directly, without having to make any assumption of bound moisture levels, as microwave moisture meters must. The analyzer itself operates on a sample stream; hence, the logical location for the unit was in the vicinity of the existing sam-pling system, where a sample could be routed to the analyzer. (See Figure 2).

There are actually two technologies deployed in the Progression Titan CCA: Magnetic Resonance (MR) and Laser Induced Breakdown Spectroscopy (LIBS). MR has always held promise for online moisture measurement; the chal-lenge was designing an analyzer that could incorporate an analysis chamber small enough for MR to operate. The Titan CCA does just that with its 1.2-in. diameter analysis chamber. The use of LIBS for online elemental analysis was-n’t entirely new, with an Israeli compa-ny having done trials in South Africa a few years ago without commercial suc-cess. The Titan CCA’s LIBS analysis, in contrast, has shown excellent ability to do elemental analysis.

Magnetic Resonance operates by the rapid application and removal of Radio Frequency (RF) electrical pulses within a magnetic field. The technology is equivalent to receiving a full body MRI at a hospital—the difference being the analyzer returns spectroscopy data while the hospital MRI returns images. This phenomenon provides precise hydrogen proton measurements leading to very accurate moisture measurement and hydrogen proton inputs into the calorific value determination.

LIBS operates by focusing a laser into a second analysis chamber and analyzing the spectrum of the vaporized material (See Figure 3).

Not only can LIBS achieve accura-cies comparable to those of other ele-mental analysis technologies (primarily PGNAA) for sulfur and the six major ash constituents (Si, Al, Fe, Ca, K and Ti), but it also can measure Na and Mg, which PGNAA cannot in most coals. This in turn leads to better ash fusion determination and more accurate base-to-acid ratio estimation.

Progression is anything but a novice to these technologies. They have been successfully supplying the petrochemi-cal market with MR technology for more than 20 years. In 2004, the company began working with some of the world’s most knowledgeable LIBS experts in the fields of space exploration, mining and materials handling and government labs. In that same year, Progression first tested a commercial LIBS analyzer on an over-the-belt configuration within the minerals industry and today has multiple MR systems operating within the phosphate industry. The years of real-world applications experience in the mining industry contributed signifi-cantly in the development and design of the Titan CCA.

The Titan CCA combines both tech-nologies in a single instrument, with adjacent analysis modules for MR and LIBS (See Figure 4).

The small footprint (64-in. wide by 24-in. deep) coupled with mechanical conveying to the analyzer and pneumat-ic transport of sample streams from the unit minimizes installation problems. Considering that the unit operates on minus 4 mesh sample streams, this ana-lyzer is most likely to be found in load-out towers, accepting either secondary or tertiary reject streams.

The PRB mine discussed in this arti-cle actually tried out a prototype device from Progression in 2010 and then opted for a full production unit in the fall of 2011. For a view of the installed Titan CCA, see Figure 5.

As is typical of any established tech-nology being applied to a new market, there were some teething problems dur-ing commissioning. These issues, asso-ciated with a reliable air supply to the unit, coal sampling, and network con-nectivity had been satisfactorily addressed by early 2012. The unit has been running reliably since then.

The PRB mine with the Titan CCA uses it in both feedback and feed-for-ward modes. They use a rolling average of online analysis results to detect trends in sulfur, ash, moisture, Btu/lb and Na2O ash fraction, and ascertain whether any of the contract specs are at risk. If they are, a team makes a quick mitigation decision that may consist of either guidance to the shovel operators or in extreme cases reassigning one or more haul trucks to the higher quality location. In addition, the control room operator tracks the silo qualities in real time, looking for any trends that might threaten a contract limit. He, too, can direct a mitigation response, to restore a cushion in coal quality vis-à-vis con-tract limits.

There are tangible benefits that the analyzer brings to the mine. With the analyzer, the mine has increased its ability to communicate with the pit pro-duction operators and troubleshoot quality variances, and they can more readily respond to adverse quality trends not apparent from the core data. Having coal quality information on a real-time basis is especially critical when the mine is loading trains back to back, in order to avoid backing up rail traffic or losing a train altogether.

Analytical Results
Inasmuch as the mine already had a two-stage sampling system on the silo feed belt, lab vs. analyzer comparisons for performance assessment were straightforward. Performance data from a three-week period in February 2012-March 2012 showed that the Pro-gression unit was outperforming other elemental analyzers particularly in calorific value and moisture, and of course in Na2 O as well, since PRB sodi-um levels lie below the detection threshold for PGNAA analyzers.

Comparisons between the laborato-ry and the analyzer on three to four hour batches on moisture, calorific value, ash, sulfur and sodium are shown in Figures 6a-6e.

Figures 6f and 6g draw a compari-son between the performance of the Titan CCA analyzer and another analyz-er using PGNAA technology, also on PRB coal. The PGNAA data was taken from a published document from anoth-er analyzer supplier.

Summary
The coal industry has made great strides in productivity over the past quarter century, but it has done so pri-marily without the benefit of any major technological or significant design improvement in mining equipment. Mining efficiency gains have been largely of the incremental variety, as opposed to step jumps. This has been especially true with online analyzers. However, there now appears to be an innovative pair of technologies found in a single instrument from Progression Inc. that could be the process control breakthrough the market has been wait-ing for.