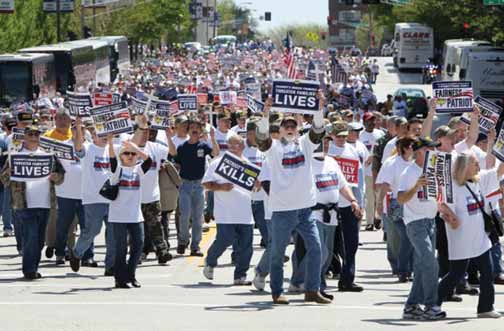 Retired union mineworkers protest against Patriot Coal in St. Louis.
On May 29, a federal bankruptcy judge in St. Louis ruled in favor of officials at Patriot Coal seeking to annul union con-tracts, a move allowing the financially dis-tressed company to impose sharp wage and benefit concessions on current and retired miners. In a 102-page decision, Judge Kathy A. Surratt-States of the U.S. Bankruptcy Court granted Patriot’s motion to reject collective bargaining agreements with the United Mine Workers of America (UMWA) while terminating current benefits for retirees. Patriot had asserted reorgani-zation would be impossible without the cuts—a claim the union fought in court and with frequent, sometimes boisterous, public protests.

Citing union requirements and “without relief from debtors’ current retiree benefit costs, debtors will be forced into liquida-tion,” Surratt-States wrote of a case “plagued with uncertainty,” after a week’s worth of hearings.

The ruling was a major blow to the union, which represents about 40% of Patriot’s miners. UMWA President Cecil Roberts described the outcome as wrong and unfair. “Under American bankruptcy law, the short-term interests of the compa-ny are valued more than the dedication and sacrifice of the workers, who actually pro-duce the profits that make a company suc-cessful,” Roberts said. He said the union would appeal it in federal court.

Patriot Coal CEO Ben Hatfield, howev-er, hailed the decision. “This ruling repre-sents a major step forward, allowing our company to achieve savings critical to reor-ganization and preservation of more than 4,000 jobs,” he said in a statement. “The savings contemplated, together with other cost reductions across our company, will put Patriot on course to a viable business.”

Accordingly, Patriot may now cease con-tributions to a union pension plan on behalf of unionized workers, while reducing over-time pay, planned wage increases and vaca-tion time, among other concessions. In addi-tion, Patriot may terminate current retiree benefits while transferring them to a trust as of Q1 2014, financed by up to $300 million in future profit-sharing contributions.