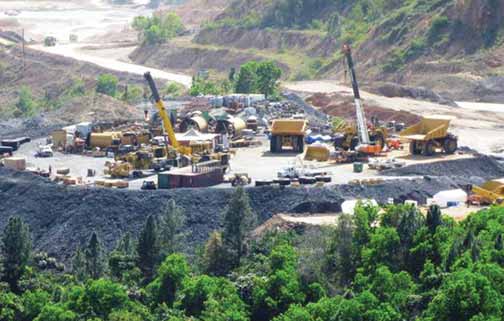 Mine production equipment being assembled at Pueblo Viejo in preparation for ramp-up to full rated capacity in late 2013.
(Photo courtesy of Barrick Gold)
Barrick Gold reported on May 8 that Pueblo Viejo Dominicana Corp. (PVDC) had reached an agreement in principle with the government of the Dominican Republic concerning amendments to the Pueblo Viejo special lease agreement. PVDC is the operating company at the Pueblo Viejo open-pit gold mine and is jointly owned by Barrick (60%) and Goldcorp (40%). The mine achieved commercial production in January 2013 and is expected to produce more than 1 million oz/y of gold over its first five full years of operation.

The proposed amendments are subject to negotiation of a definitive agreement, which will require the approval of the boards of directors of Barrick and Goldcorp, the project lenders, and the Congress of the Dominican Republic.

The amendments would increase gov-ernment participation in Pueblo Viejo prof-its during the early years of operation and extend the period of capital return for the project’s owners. Barrick now anticipates an approximate 50:50 split between PVDC and the government of expected cash flows from the mine over the years 2013 to 2016. At a gold price of $1,600/oz, this would result in tax revenues to the government of approxi-mately $2.2 billion during this period.

Barrick estimates the economic benefit of these changes to the government over the life of the mine at approximately $1.5 billion (net present value at 5% discount rate and $1,600/oz gold price assumption).

The Barrick announcement stated, “We are pleased to reach an agreement in princi-ple that preserves the economic value of the Pueblo Viejo mine, while also addressing the fiscal objectives of the country, in a way that will provide stability for both parties moving forward. PVDC is one of the largest foreign investors in the Dominican Republic, and it is in the company’s long-term interest to support the economic stability and develop-ment of the country, where it will be operat-ing for the next three decades.”

Pueblo Viejo is scheduled to ramp-up to its full capacity in the second half of 2013. The project was completed at a capital cost of $3.7 billion. The mine has more than 25 million oz of gold in proven and probable reserves.

The Pueblo Viejo orebody model is essentially open in all directions, with high potential for resource expansion along strike and down dip. Potential is also high for definition of higher-grade zones within the current pit limits, by infill drilling of areas previously drilled by widely-spaced exploration holes.

The Pueblo Viejo mine is an open-pit, truck-and-shovel operation that produces 95,000 mt/d, excluding re-handling and quarrying activity. The strip ratio will be 0.8:1 during the first five years of operation, when grades will average 3.12 g/mt gold, and mining costs will average $2.60/mt.