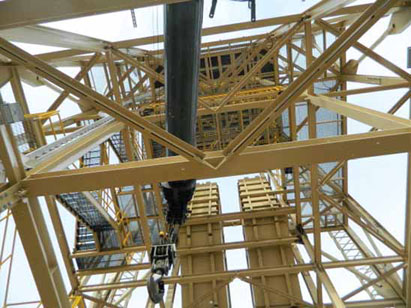 Looking upward at the headframe steelworks in place at Nevada Copper’s Pumpkin Hollow East project.
Nevada Copper announced it will develop its Pumpkin Hollow copper project near Yerington, Nevada, in two stages. Stage 1 will be a 6,500-mt/d underground mine and concentrator based on the property’s East deposit, where shaft sinking is cur-rently in progress.

An updated feasibility study for Stage 2 development of open-pit mines on the property’s North and South deposits is currently targeted for completion on or before August 2013.

Cash flows from the underground operation beginning in 2015 would sup-port financing and development of a larg-er, Stage 2, open-pit operation, which could have plant throughputs in the range of 70,000 to 90,000 mt/d.

Capital cost to develop the Pumpkin Hollow Stage 1 underground mine is esti-mated at $329 million. On March 28, Nevada Copper closed a $200-million loan facility and copper concentrate off-take agreement with RK Mine Finance (Red Kite), with proceeds to be allocated to the construction of the stand-alone underground operation. Nevada Copper reports that the initial tranche of funding from this facility and additional funding on receipt of key state permits allowing full construction of an underground min-ing operation, combined with its current treasury, will be more than sufficient to support project development work through the second quarter of 2014.

This work includes sinking of a 2,200-ft (670-m) production shaft, con-struction of the head frame and associ-ated surface works, and commencement of detailed engineering work. The engi-neering work is targeting placement of key equipment orders by the third quar-ter of 2013.

Ore from the East deposit will be crushed underground, hoisted to surface, and transported to a nominal 6,500-st/d concentrator located approximately 1,500 ft (457 m) northwest of the shaft. Initial mine life is estimated at 12 years, including average production of 75 mil-lion lb/y of copper in concentrate during the first five years of operation.

Detailed mine design work is under way. Once the production shaft is com-pleted, orebody definition drilling will resume from underground drill stations, targeting areas of higher grades, with an initial objective of allowing early produc-tion from the highest-grade stopes.

With mineralization in the East deposit currently open in several direc-tions, Nevada Copper management expects further drilling from underground stations will also extend the mine life beyond 12 years.

Nevada Copper President and CEO Giulio Bonifacio said, “As a result of closing the Red Kite transaction, Nevada Copper will move toward a fully permitted and funded underground operation in the short term while maintaining 100% own-ership of the Pumpkin Hollow project.

We believe this is a superior strategy that will allow for the commencement of commercial production and cash flow in 2015, while also further facilitating funding of the larger open-pit operation.

We will also continue to move forward with receipt of open-pit permits expected in 2013, which will be a significant step in beginning the development of the sec-ond-stage of Pumpkin Hollow.”