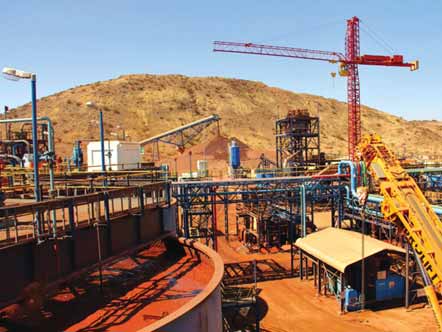 Nevsun Resources is looking at a 2013 commissioning date for its expanded copper concentrator facility,
shown here under construction, at the Bisha mine in Eritrea. (Photo courtesy of Nevsun Resources)
Nevsun Resources reports that the copper expansion project at its Bisha mine in Eritrea is proceeding on schedule and on budget. The project will expand ore pro-cessing capacity at Bisha from 2 million to 2.4 million mt/y and convert the operation from production of gold-silver doré to pro-duction of copper concentrate. When the expansion project is complete, production at Bisha is expected to total 180 million lb/y of copper in concentrate, with significant gold and silver byproduct credits. Capital spending for the project is forecast at about $100 million, and hot commissioning is scheduled for the second quarter of 2013.

The bulk of the project capital cost for the Bisha expansion is going toward con-struction of a copper flotation concentrator and concentrate load-out facilities. The existing carbon-in-leach processing plant will be placed on care and maintenance in a condition that will allow it to be re-com-missioned if additional gold oxides are found at or near Bisha.

As of mid-June 2012, most of the major equipment, including all of the copper flota-tion cells, arrived at Bisha and was awaiting installation. The filter press frames, regrind mills, concentrate thickener, mill cyclones and regrind cyclones were in transit.

Foundations for the cells, racking, reagents storage, and workshop were nearing com-pletion, and assembly and installation of the plant equipment was expected to begin before the end of the month.

Nevsun has selected a Rotainer system for delivery of concentrate into bulk ship-ping carriers, using the existing Massawa container port on the Red Sea coast of Eritrea. Concentrate will be trucked in reusable intermodal containers from the Bisha mine site to the port and stacked at the existing container facility. Container trucking will be contracted, and no special-ized truck or trailer equipment is required. The copper concentrate containers will be discharged into bulk carriers using Rotainer’s “Lid-Lift” crane equipment. The capital cost of the Rotainer system and con-tainers is expected to be under $25 million.