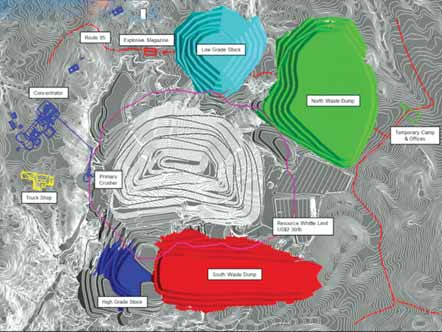 Plan view of mine layout for the Quebrada Blanca Phase 2 expansion project, which will cost an estimated
$5.6 billion. (Photo courtesy of Teck Resources)
Teck Resources has completed a feasibility study and filed an NI 43-101 technical report for the Quebrada Blanca Phase 2 hypogene project in northern Chile. Teck owns a 76.5% interest in Quebrada Blanca. The other shareholders are a Chilean private company, which owns a 13.5% interest, and Empresa Nacional de Minera (ENAMI), a state-owned Chilean mining company, which has a 10% non-funding interest. The study estimates a capital cost for the devel-opment of the project of $5.6 billion (in January 2012 dollars, not including work-ing capital or interest during construction), of which Teck’s funding share would be $4.8 billion. The study contemplates the construction of a 135,000-mt/d concentra-tor and related facilities connected to a new port facility by 165-km concentrate and desalinated water pipelines.

The Quebrada Blanca Phase 2 mine plan includes a mine life of 39 years with-in the designed pit, including mining of mineral reserves, inferred mineral re-sources, leach (supergene) resources, and associated low-grade material. Marginal material would be stockpiled in the early years of operation and fed to the mill in later years. Significant mineral resources outside the mine-plan pit provide potential for expansion in future years, and the mine facilities have been designed with this in mind.

The Quebrada Blanca Phase 2 project includes inferred mineral resources that are considered too speculative geologically to have the economic considerations applied to them that would enable them to be categorized as mineral reserves. However, based on the nature of the min-eralization, Teck believes the feasibility mine plan, which includes inferred miner-al resources, represents the most likely ini-tial development scenario for the Quebrada Blanca hypogene deposit.

Teck is in discussions with the other shareholders of Quebrada Blanca concern-ing financing options for the hypogene pro-ject, which may include limited recourse project financing and, possibly, bringing in a new funding partner. A decision to pro-ceed with development will depend on the outcome of these discussions.