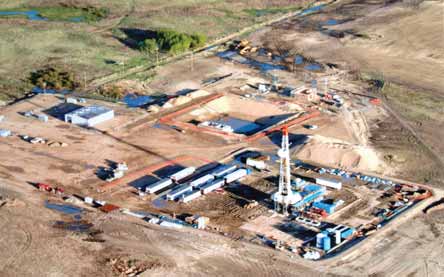 Aerial view of K+S Potash Canada’s Legacy project during construction. Initial production is scheduled to
begin in 2015, gradually increasing to 2.86 million mt/y of potassium chloride by 2023.
(Photo courtesy of K+S Group)
K+S Potash Canada, a subsidiary of Germany’s K+S Group, held an official ground-breaking ceremony at the site of its Legacy solution mining potash project about 50 km north of Moose Jaw, Saskatchewan, June 19, 2012. K+S has approved C$3.25 billion in capital spend-ing to develop the project. Initial produc-tion is planned for 2015, building to 2 mil-lion mt/y of potassium chloride in 2017, followed by a gradual expansion to 2.86 million mt/y by 2023. In a further expan-sion phase, production is planned to increase to a total of about 4 million mt/y of potassium chloride about 10 years later.

The initial exploration area at the Legacy project, which makes up only a fraction of the total permitted area of K+S Potash Canada, has proven reserves of 160 million mt of final potash product. Mine life is estimated at more than 55 years, including ramp-up. At about 18%, the K 2O content of the reserves is significantly higher than that of K+S’s German sites. The remainder of the lease area contains additional resources of almost 1 billion mt of potassium chloride.

Richard Wilson said, “We’re in the process of finishing initial work on the pro-ject. This work is primarily comprised of infrastructure development and the first stage of the mining process—the road work, earthwork for the plant, drilling of the first wells, and the establishment of the supporting water system.”

Tim McMillan said, “This is certainly a great day for the people of Saskatchewan. For the first time in over 40 years, a brand new potash mine will be built in our province. The jobs and economic develop-ment from this project will help us to con-tinue to grow our economy and keep the Saskatchewan Advantage.”