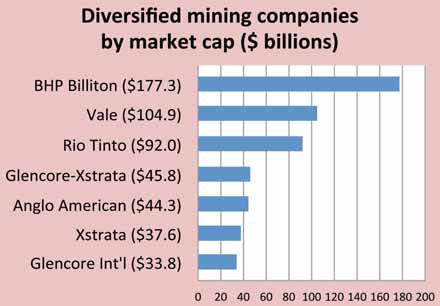 Xstrata and Glencore revised the terms of the proposed $56 billion merger, which shifted attention to Glencore's ability to sat-isfy Xstrata shareholders, who are unhappy with the price Glencore would pay for the portion of Xstrata it doesn't already own. The company has proposed 2.8 Glencore shares for each Xstrata share and a $271 million retention package for executives and managers. Glencore owns 34% of Xstrata.

A previously announced earnings esti-mate of at least $500 million per year for the merged companies included approxi-mately $50 million of cost synergies. Vesting of retention awards for Xstrata's management will now only occur if addi-tional cost savings are achieved over and above the $50 million level identified in the estimate. Full vesting of the retention award will only occur if a minimum of an addi-tional $300 million of incremental cost sav-ings arising from the merger are achieved two years after the merger is completed.

The retention package will now be paid entirely in stock. Under the original plan, Mick Davis, CEO, Xstrata, who would become CEO of the merged company, would have received nearly $15 million a year through 2015 with no obligation to meet performance targets. He will now be fully vested only when at least $300 million of incremental merger costs savings are post-ed during the two years following the deal.

Similarly, Xstrata's senior management, excluding the executive directors and six other executive committee members, will be paid in two equal payments at the first and second anniversaries of the closing of the transaction. All of the retention awards for the members of Xstrata's executive committee will now be subject to the real-ization of additional cost savings arising from the merger.

"The merger with Glencore is in the interests of all Xstrata shareholders and will provide the best platform for value cre-ation in the future," said Sir John Bond, chairman, Xstrata. "The merger has always consisted of three inseparable and interde-pendent elements—the merger ratio, the governance and management structure and the management retention arrange-ments. Retaining Xstrata's proven manage-ment team is essential for the success of the merger. Xstrata management will be responsible for over 80% of the combined group's earnings, 150 mining and metal-lurgical assets and 20 major growth pro-jects. We would not have recommended the merger on its current terms without arrangements to secure Xstrata's manage-ment team in the critical initial years of the combined group's life."

The new company would be the fourth largest mining company based on market capitalization. Xstrata shareholders were originally scheduled to vote on the agree-ment July 12, 2012, but that has now been postponed. Shareholders must now approve the ratio and the retention package in sep-arate votes. At 10.4%, Qatar Holding, Xstrata's second largest shareholder said it would like to see a share ratio of 3.25:1. The executive retention package only needs a simple majority of Xstrata's non-Glencore shareholders, while the overall agreement needs 75%. With Glencore restricted, 16.5% of Xstrata shareholders could derail the deal. Many analysts believe that Glencore would walk away from the 3.25 ratio, but it might be able to sweeten the pot enough, say 3:1 or 3.1:1, to get Qatar to buy into the deal.