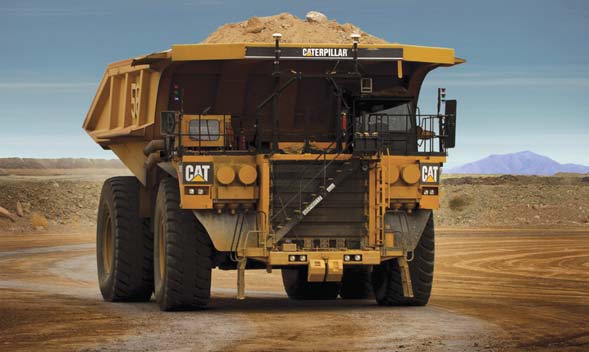 This Caterpillar 793F truck is equipped for autonomous operation using Cat's Command for haulage technology, part of the company's newest
version of its MineStar equipment management suite for mines. Iron ore producer Fortescue Metals recently ordered a fleet of 12 autonomous
793Fs for its Solomon mine project and intends to expand the fleet to as many as 45 trucks by 2015.

In June, Caterpillar formally introduced the latest version of its MineStar system technology suite to the mining press, along with MineStar's first 'capability set'—a sub-suite of products and functionalities that can operate in stand-alone applications or can be combined with other capability sets to expand the scope of equipment-management tools up the full range available in the complete MineStar suite, including autonomous operations (see sidebar). Terrain, the first of these capability sets to reach the market, is a direct replacement for the Computer Aided Earthmoving System (CAES) and Aquila Drill and Dragline products and, according to Cat, offers many improved features and functionality as well as increased scalability.

Caterpillar will roll out four other capability sets throughout 2011 and 2012. Like Terrain, most of the capability sets are based on existing Cat mining technologies, but also offer additional features and better scalability. During a Web-hosted press conference announcing the rollout, Michael Murphy, manager of technology, explained the new MineStar system and its capability sets are the direct result of Cat's 'building block' approach for developing mine technology products, stretching back 15 to 20 years.

Annette Slyman, Cat's commercial manager, said MineStar customers could start with any of the MineStar capability sets and expand as needed. "Each of the capability sets has its own functionality and feature set, but they are designed to be flexible and scalable. Each mine can define its own needs, and add capability sets as required," she said.

Besides Terrain, other capability sets include Fleet, Detect, Health and Command. Fleet provides real-time machine tracking, scheduling, assignment and productivity management. Fleet is intended to enhance management of grading, loading, hauling and auxiliary equipment operations and can provide an overview of production to key decision makers and managers. According to Slyman, Fleet is the cornerstone element of the MineStar suite that facilitates autonomous operations.

Detect encompasses sensing and reporting systems that assist an operator in avoiding collisions, including proximity awareness of fixed and mobile equipment as well as detection of smaller objects. Detect is applicable on a wide range of equipment, including both Cat and other brands of off-highway trucks, Cat track-type tractors, Cat wheel loaders, Cat motor graders, Cat wheel dozers, shovels and light-duty vehicles.

Detect is scalable and offers a range of capabilities—Vision, Object Detection, Proximity Awareness and Personnel. Starting with Vision, mining operations can install camera-only systems on mobile vehicles, allowing operators to view the area surrounding the machine via an in-cab display. Building on Vision, Object Detection adds radars and in-cab software that provides notification to the operator when an object is detected within the radar coverage area. Proximity Awareness adds Global Navigation Satellite System (GNSS) capabilities that allow Detect to display the locations of other equipment and assets beyond the reach of its radars. It also allows programmed information—such as avoidance zones, fixed plant infrastructure and more—to be displayed in the cab. Personnel adds capabilities for tracking individual electronic tags that can be worn, placed in light vehicles or attached to portable equipment. The system gives these tags a presence within the digital mine site environment, enabling equipment operators to see exactly where people and assets are located in relation to their machines.

"Proximity awareness is still a little out on the horizon for Caterpillar," Slyman said during the press conference, noting the feature would become available late in 2011. The new MineStar's capability for object detection, however, is the culmination of system development that Cat began to offer as a retrofit system for its large mining trucks in January 2010. The company has advanced the system so it is now suitable for application on a wider range of mining equipment and, according to Slyman, customer feedback following the retrofit introduction allowed Cat to refine the system's in-cab user interface and other features. As of January 2011, Cat has included object detection as standard equipment on all of its mining truck models.

Health provides comprehensive equipment health and asset monitoring capabilities, and delivers vital event-based machine condition and operating data for the mining fleet. It offers a range of diagnostic, analytic and reporting tools and, according to Cat, works with virtually all mine site equipment assets, including equipment from other manufacturers.

By integrating the capabilities of Fleet, Terrain, Detect and Health, Command can deliver improvements in safety, productivity and equipment availability. Command includes remote control, semi-autonomous and autonomous systems for both surface and underground mobile mining equipment. Command is available or will be available on select blasthole drills, Cat underground load haul dump machines, off-highway trucks and track-type tractors. Command, according to Cat, can provide autonomous capabilities on just one machine or multiple types of machines. Command for dozing or drilling systems can be implemented individually or on a small group of machines. .

Managing with Terrain
Terrain itself offers several 'capability packages.' The Productivity package enables a mine to track and analyze machine utilization and productivity by machine type and operator. The Position & Material package allows machines to share position and job status information both on-board and in the office. Data Share allows Terrain to share information with other applications such as non-Cat branded fleet management systems, data reporting systems, and position monitoring systems via an industry standard interface. Multi-Site allows for management of multiple Terrain-equipped sites from a single control center.

According to Cat, now managers and engineers don't have to switch applications to get a full picture of what's happening at the mine. Terrain allows management of drilling, dragline, grading and loading activities, while using a single computer application. Terrain enables production managers to monitor, track and accurately report on multiple mine processes. Using the office software, managers can track the amount and types of material moved versus plan, as well as an overview of drilling operations. Managers can view information by machine, within a production area or for an entire pit. All machines using precision Global Navigation Satellite System tracking and guidance can be managed within Terrain.

A Web-based user interface makes file management easier and reduces the number of steps required to send design files, according to the company. System options allow the customer to configure Terrain to link-to and control several remote sites from a central location that could be sited in a major population center adjacent to a mining district, or from a remote location itself, giving customers the flexibility to station office, engineering and other personnel in more efficient and accessible surroundings, if necessary.

Terrain for drilling includes hole-to-hole updates that provide blasthole drill operators with real-time status of other holes being drilled in the same pattern. The information enables each drill operator to plan appropriate drill moves and to avoid duplicating efforts. Terrain shares current elevation data from dragline cuts with dozers and other grading machines working near the dragline.

Terrain can assign job tasks to grading and loading machines, based on their location, and can manage completion of those tasks via the optional Productivity capability package and the Task List Manager application.